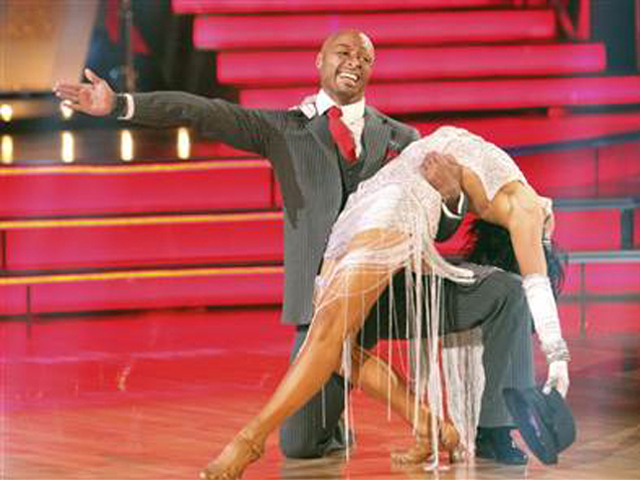 (CBS) Five dancers left. And one of them was Nancy Grace.

This week, the remaining "stars" in "Dancing with the Stars" had to dance twice. Worse, one of the dances was supposed to be instant.

Rob Kardashian, he of the uncontrolled posterior, practiced tightening his bottom. However, according to partner Cheryl Burke, he's simply crooked from the back. His quickstep featured some successful leg-kicking, but had enough wood in it to create more than one kitchen spoon. He still has the arthritic shoulders of a retired linebacker, but demonstrated remarkably showy exuberance, as if he'd taken extra lessons from former champion Helio Castroneves.

"When you started, I thought this isn't going to work," said judge Len Goodman. He added: "I had a good look at your buttocks and they were tucked in. Your best dance so far."

"You were speedier than a drag race," added Bruno Tonioli, adding a subtle emphasis on the word "drag."

He marveled at Kardashian's improvement. Kardashian applauded. Oddly, sister Kim didn't seem to be in the audience.

"And you had the best week of any Kardashian," mused presenter Tom Bergeron.

Hope Solo hasn't had a "best week" yet. Her weeks have characterized by drama, tears, drama and some tears. Solo, in rehearsal, said she was "just a girl." She bemoaned the excessive intensity of the previous weeks. Her partner, Maksim Chmerkovskiy decided to try and gentler approach: more Medvedev than Putin. Tending toward Gorbachev, even. He introduced her to his family.

Solo's quickstep was a yellow revolution. She and her partner held yellow umbrellas. She had a yellow shawl dangling from her shoulders. This was as mellow yellow as a quickstep could get. And yet Solo still seemed to rush herself to reach positions that she thought she should inhabit. Overall, it was joyful, playful and bountiful.

"What's going on tonight?" waffled Tonioli. "It's the night of miracles." He described her as "re-booted and re-energized." Carrie Ann Inaba just wanted to hug Solo.

Ricki Lake had to hug her partner, Derek Hough, in a very formal way during their waltz. To the tune of "You Make Me Feel Like a Natural Woman," Lake was fluid, flowing, and positively fluorescent with class.

Her fiance still looked sterner than a Politburo accountant, however. The judges, for some strange reason, decided to be critical. Inaba noticed a stumble and a shoulder misalignment.

"This was like a river," gushed Goodman. However, he was miffed that there were no heel leads and therefore refused to give her a 10.

Teaching Nancy Grace to dance is like teaching a sea lion to write books. She cannot stop talking and one gets the feeling that listening is rather low on her priorities list.

"We still haven't found the best way to work with each other," said her partner Tristan McManus.

Grace's tango was the sort of laughable where no one laughs. She stumbled her way through it like a politician whose autocue malfunctioned.

Goodman was complimentary beyond all reason. Tonioli said she had the right attitude. Inaba tried to criticize her toes, with little conviction. Even Inaba's bangs bristled at the sight of her evasiveness. She said Grace had done "a great job." The Marcia Clark kind of great.

The judges, therefore, adored it beyond reason.

Tonioli described it as "musical Valentine card." Inaba thought something magical had happened in the middle. I'm not sure what that might have been. Goodman could only criticize him for not having worn a tie.

The whole segment had featured Martinez's desperation for a perfect score. In a strange twist of fate, he received precisely that - the first 30 of the season. America swooned.

What promised to be even more exciting was the instant dance, where the dancers had less than an hour to prepare a jive. This was Nescafe dancing. Would it have predictably instant results?

"There was no glaring mistakes," said Goodman, ungrammatically. But he wished that Kardashian would flick his legs a little more.

Solo was hoping she could merely flick her legs in time with the music. Her previous jive had reminded some of the North Korean men's World Cup team. This time, she wore the sort of trousers that were so frilly they seemed to move on their own. With a small flick of her legs, she was able to generate a large movement in her trousers, which created a fine and dynamic effect.

When the music stopped, she and Chmerkovskiy just kept going.

Tonioli described it as "the fast and the furious." But he complained she didn't stretch the backs of her knees. Inaba worried that her hands were crazy. Goodman complained about the position of her nostrils. No, wait. He described it was "fantastic." The phrase "bloody brilliant" seeped from his lips.

Lake is so preternaturally coordinated that the jive presented few problems. She managed to end it by posing across partner Hough's knee for what seemed like a full two minutes. And yet the judges decided this was not good enough. Inaba criticized her stops and starts, where Hough started and didn't stop. The other judges agreed.

One can only imagine that the judges' harsh scoring was supposed to motivate the voters at home. Or perhaps they were trying to get Lake's fiance to show some emotion. Any emotion.

McManus, alone in the United States, has clearly had enough of Grace. He tries to reason with her, while she is deliberately contrary. Which might be tolerable if she was a fine dancer.

"I'm tired of you," retorted McManus. And who could blame him? Grace sometimes has all the charm of a windy squall.

Worse, Grace then played another victim card. She mourned her age. If her performance were being criticized by, say, a Court TV presenter, the results would not have been pretty.

Her jive wasn't pretty either. This was pedestrian and largely jiveless. Grace stood in the middle of the dance floor, hoping that moves would come to her. One can only imagine that the cartwheel she blundered into at the end was placed there by McManus as a final farewell.

As she went down on her knees before the judges, Goodman conspicuously ignored her.

"It was a little laid back and loose," said Tonioli. Inaba somehow praised the chemistry between Grace and McManus. The latter has proved himself to be this season's Mother Teresa.

Martinez was seeking redemption after a lukewarm jive in the competition before. He and partner Karina Smirnoff managed to generate enough energy to power, well, Grace's mouth for a whole year, flinging themselves to this side and that with all the exuberance of prisoners at a Johnny Cash concert.

Tonioli called his timing "impeccable." He likened Martinez to one of the kids from "Fame." Or perhaps even all of them. Inaba told him he was in a class of his own.

Martinez again got perfect scores, which were more justified in this case than on his first dance.

Can anyone imagine anything other than a Nancy Grace elimination? Of course. If she stayed in it, just think of the publicity. And just think how happy Tristan McManus might be.