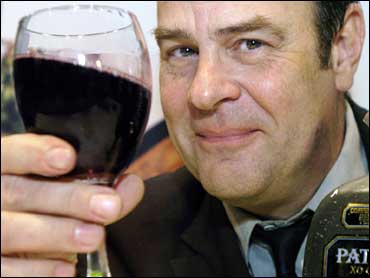 Dan Aykroyd is throwing his star power behind an $11 million winery that aims to boost the Niagara wine region's international profile.

The Dan Aykroyd Winery, which will showcase souvenirs from the actor's career, will be located near the town of Lincoln, Ontario, in the heart of the province's vineyards.

"This is really a dream," Aykroyd, who was born in Ottawa, said during a news conference Wednesday.

"We joked about doing a Coneheads vodka or something," the 54-year-old actor said, referring to one of his best-known characters on NBC's "Saturday Night Live." "And I never thought that a line of wines would be a possibility."

Construction begins this fall and should be completed in time for the 2008 growing season.

The winery will feature technologies such as solar panels and green-friendly wastewater management systems.

The project is a venture by Toronto-based Diamond Estates Wines and Spirits Ltd. Chief Executive Officer Murray Marshall said he hopes the winery will draw at least 44,000 visitors a year.

He said the winery will produce everything from mid-range wines, costing from $14 to limited releases for more than $93 a bottle.

Aykroyd was nominated for a supporting actor Oscar for his role in 1989's "Driving Miss Daisy." His screen credits also include the "Ghost Busters" movies and "The Blues Brothers" with John Belushi.