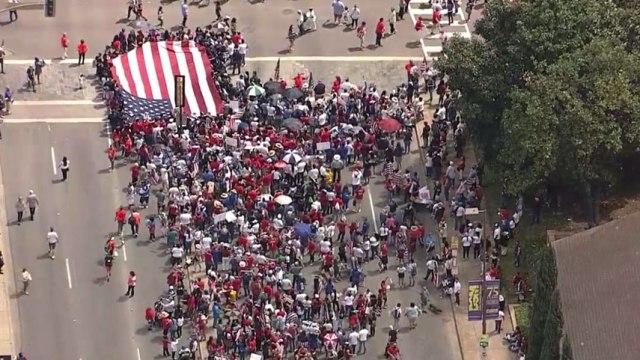 Known as Immigration Reform Mega March, people brought signs and waved American flags in what was a peaceful protest.

The Dallas Police Department estimated between 3,000 and 4,000 people marched through downtown. There were also no reported incidents or arrests.

The last Mega March in 2006 brought together about 500,000 people which was the largest civil rights march in Texas history.

Organizers of the march expected a crowd of about 100,000 people during final preparations last week.

The march started at the Cathedral Shrine of the Virgin of Guadalupe around 2:00 p.m. ending nearly 1.5 miles away.

“Every child deserves a right to go to school without fear of losing a parent,” Alanis told the Dallas News, referring to the threat of deportation.

A small number of Trump supporters gathered nearby.