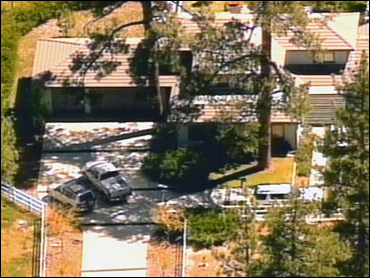 California authorities say an investigator for the Riverside County district attorney has been found dead at his ranch along with five other people.

Authorities say 44-year-old David McGowan was found dead with a gunshot wound to the head, close to the entrance of his home. A handgun and a phone, which may have been used to call 911 were found near McGowan's body.

Aside from McGowan, all of those found — including three children — were apparently shot to death in their beds.

Detectives haven't settled on a motive, but have not ruled out a murder-suicide. A sheriff said there was no evidence of a break-in or struggle in any of the rooms, and he added that the "community is in no danger."

The other two adults, a male teenager, and two younger girls have not been identified, according to KABC-TV. Everyone except McGowan was found in their undisturbed beds.

A 14-year-old boy, two girls — ages 8 and 10 — and two adult women were found in beds throughout the house, all of them shot in the head. Names of the victims were withheld pending positive identification, Doyle said.

"The beds were undisturbed. The house itself was undisturbed. It did not appear that the house had been ransacked," Doyle said.

The sheriff said someone called the police emergency dispatcher from the house at 4:33 a.m. A dispatcher didn't hear any voices on the line, but was able to identify the sounds of the telephone hitting the wall and a gunshot, Doyle said.

"It was pretty much no one on the other end of the phone. There was some noise that was heard by dispatch," he said. The noises clued the dispatcher off to the urgency of the situation.

The remote, mountainous area about 100 miles southeast of Los Angeles is well-known for its horse ranches, nestled among rolling meadows and tall pines.

McGowan was a five-year veteran of the Riverside County district attorney's office and previously worked as a detective with the Cathedral City Police Department.