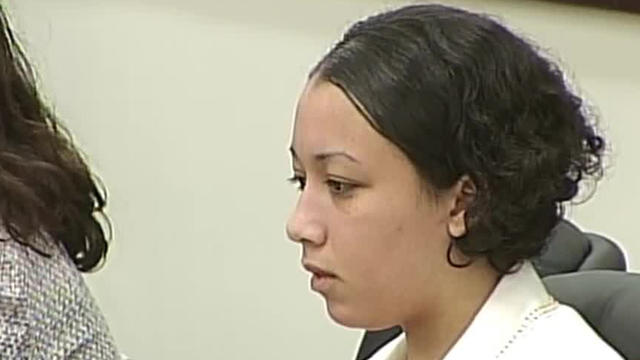 NASHVILLE, Tenn. -- A celebrity social media campaign is highlighting issues of sex trafficking abuse in the case of a Tennessee woman convicted as a teen of killing a 43-year-old man who had picked her up for sex.

Cyntoia Brown was 16 when she shot and killed Johnny Allen in 2004, who she encountered after demands from an abusive pimp to make money. She claims she was afraid of Allen, who she said was behaving strangely and had a house full of guns. She says she thought Allen was reaching for a gun when she fired, reports CBS affiliate WTVF.

But prosecutors in Nashville say Brown killed Allen in order to steal from him — she left with his pants, containing his wallet, and some guns. At her 2006 trial, the jury sided with prosecutors, convicting Brown of first-degree murder and sentencing her to life in prison.

But since then, a 2011 documentary shown on public television has stirred sympathy for her, and support on social media this week from celebrities including Rihanna and Kim Kardashian West has caused the case to go viral. Supporters say Brown was a victim of abuse who was instead treated by the legal system as a prostitute.

Nashville attorney Charles Bone said he became interested in Brown's case after seeing the film. He was in court last week arguing that Brown deserves a new trial for reasons including that her attorneys at the original trial were deficient, specifically in advising her not to testify.

Her current attorneys believe that advice was given based on a misconception about the law.

"I wanted to testify. My family thought I should testify," Brown, now 24, said during the Nov. 13 hearing. If she had, the jury likely would have heard something like what she next told the judge.

At the age of 16, Brown was a runaway who had been crashing with friends in Nashville for about a year. Toward the middle or end of July 2004, she met a 24-year-old man nicknamed "Cut-throat." They started living together — staying at different motels around town and snorting cocaine every day.

He abused her physically and sexually. She said he once choked her until she passed out. Other times he pulled a gun on her.

"He would explain to me that some people were born whores, and that I was one, and I was a slut, and nobody'd want me but him, and the best thing I could do was just learn to be a good whore," she testified.

He forced her to prostitute herself so that they would have money to live, she said. On the day she met Allen — Aug. 5, 2004 — the man she called Cut had hit her and told her to go out and bring back some money.

Allen picked her up off the street and bought her some fast food. He asked her if she was OK, but after listening to her story, asked if she was "up for any action," Brown said.

He drove her back to his house where his strange behavior frightened her and made her want to escape. When she couldn't sneak away, she said she wanted to nap. He lay down with her but didn't fall asleep. He kept getting up and standing over her, she said. She became more panicked, convinced something was going to happen to her. Finally, she shrugged off his advances and, as he rolled over, she took a gun from her purse and shot him once in the head.

Richard Adler, a clinical and forensic psychiatrist, who also testified Nov. 13, suggested that Brown's erratic behavior could be explained by her birth mother's abuse of alcohol while she was pregnant with Brown. He and other experts have diagnosed Brown as suffering from alcohol-related neurodevelopmental disorder — a type of fetal alcohol syndrome disorder that he characterized as a "severe mental disease and defect."

Although Brown has a high IQ, Adler said that testing last year showed her to be functioning at the level of a 13 or 14 year old.

Brown's attorneys argued that was evidence that should have been presented at her original trial.

Prosecutor Jeff Burks, in cross-examination, sought to show that Brown had some of the best criminal defense attorneys in Nashville at trial, so her defense was far from deficient. He also suggested that had Brown testified on her own behalf or introduced evidence from a mental health expert, then other issues that would reflect badly on Brown would also have come up.

Burks mentioned her drug use, her lengthy juvenile history and a suggestion to an acquaintance that they return to Allen's house to steal more.

Bone told WTVF he plans to appeal to the Tennessee governor for clemency next month.

"We think it's time for her to be considered for some drastically reduced sentence," Bone said.

The documentary about Brown, called "Me Facing Life: Cyntoia's Story," was part of PBS's Independent Lens series. Director Dan Birman, who was filming in court last week, said it was also picked up by the BBC and has been shown elsewhere abroad.

"I think there are still people who don't see her as a victim because they think she made the choice to be out there and put herself in that situation," Brown's former public defender Kathy Sinback told WTVF. "But when you look at all the factors that led her to that place, she was being victimized by an older man who was her pimp, who was beating her, threatening her, and abusing her emotionally, physically, and sexually. I think most people would not be able to protect themselves in those situations if they were 16 years old."

It wasn't immediately clear what caused the renewed interest from Rihanna and West, who posted using the hashtag, #FreeCyntoiaBrown. A petition calling for her release is also gaining momentum online.

Sinback told WTVF Brown is grateful for the support.

"Just knowing that she had people who see her as a human being has been incredibly important for her," she said.