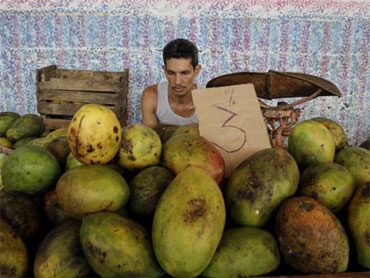 Cuba has issued a pair of surprising free-market decrees, allowing foreign investors to lease government land for up to 99 years - potentially touching off a golf-course building boom and loosening state controls on commerce to let islanders grow and sell their own fruit and vegetables.

The moves, published into law in the Official Gazette on Thursday and Friday and effective immediately, are significant steps as President Raul Castro promises to scale back the communist state's control of the economy while attempting to generate new revenue for a government short on cash.

"These are part of the opening that the government wants to make given the country's situation," said Oscar Espinosa Chepe, a state-trained economist who is now an anti-communist dissident.

Cuba said it was modifying its property laws "with the aim of amplifying and facilitating" foreign investment in tourism, and that doing so would provide "better security and guarantees to the foreign investor."

A small army of investors in Canada, Europe and Asia have been waiting to crack the market for long-term tourism in Cuba, built on drawing well-heeled visitors who could live part-time on the island instead of just hitting the beach for a few days.

Endorsing 99-year property agreements might be a first step toward making some golf developments a reality, but also makes it easy to imagine a Cuban coastline dotted with timeshares, luxury villas and other hideaways that could serve as second homes.

Cuba has allowed leases of state land for up to 50 years with the option to extend them for an additional 25, but foreign investors had long pressed tourism officials to endorse 99-year lease deals to provide additional peace of mind to investors.

John Kavulich, a senior policy adviser for the U.S.-Cuba Trade and Economic Council in New York, said Mexico has used similar leaseholds to encourage foreign investment despite restrictions on non-Mexicans owning coastal property - but that Cuba's similarities with Mexico end there.

"I don't think it's going to open a floodgate. I think it may turn on a tap so that people know there's water," he said. "Certainly it's an improvement. However ... making one change isn't a panacea to solving the issues that companies have in evaluating their opportunities in Cuba."

The island's ever-weak economy has been rocked by the global financial crisis and a sustained drop in prices of the country's chief natural resources.

Cuban officials have tried before to balance their drive for an egalitarian society with an appeal to foreigners seeking to own a piece of paradise. Scrambling for revenue in the late 1990s, the government authorized private foreign ownership of posh apartments in Havana and even signed a $250 million deal for beachfront apartments and timeshares with a Canadian company.

Many of those projects stalled, however, failing to draw enough foreign investment. Meanwhile, some overseas businessmen bought Havana apartments but allowed Cubans to live in them - violating rules barring islanders from doing so. The government eventually bought out most of the residences it had hoped would be owned by foreigners.

The decree allowing expanded sale of farm products, meanwhile, could have far greater impact on ordinary Cubans. It authorizes them to produce their own agricultural goods - from melons to milk, on a small scale - and sell them from home or using special kiosks on their property.

The decree marked the first major expansion of self-employment since Castro said in an address before parliament Aug. 1 that the government would reduce state controls on small businesses - a big deal in a country where about 95 percent of people work for the state.

The new law allows Cubans to grow whatever they wish and sell it, but will require them to pay taxes on what they earn.

Chepe, who was jailed for his political beliefs in 2003 but later paroled for health reasons, said the decree would stamp out inefficiencies that plague the state farming system, calling it an "intelligent move."

"In Cuba, the problem has not only been production, but also distribution," he said.

Cubans already sell fruits, cuts of pork, cheese and other items on the sides of highways across the country, fleeing into the bushes whenever the police happen past. Friday's measure would legalize such practices, while ensuring the state takes a cut of the profits.

The new rules are consistent with other efforts by Castro's government, which has allowed minor free-market openings while also seeking to eliminate black-market income.

Authorities have moved to approve more licenses for private taxis while getting tough on unauthorized gypsy cabs. They also made it easier to get permits for home improvements and increased access to building materials, while more strictly enforcing prohibitions against illegal building.