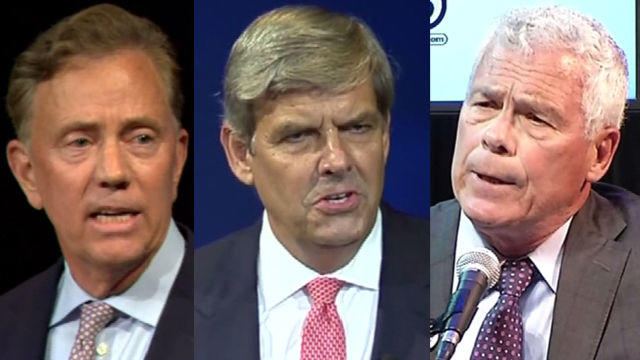 STORRS, Conn. -- Three contenders for Connecticut governor all agreed Wednesday night that more needs to be done to jumpstart the state's economy, but differed over whether imposing a massive tax cut, lowering the state's health care costs or electing an independent thinker is the solution.

Speaking to both a television audience and theater full of mostly University of Connecticut students, each candidate claimed to be the person who can make the state more attractive to young people by growing jobs and finally tackling the state's long-running fiscal woes.

"The best thing we can do for the young people of Connecticut is to get this economy moving," said Republican businessman Bob Stefanowski of Madison, who pledged to sign a "state of emergency" executive order when he takes office to get the attention of voters as to the magnitude of Connecticut's fiscal woes. The next governor will face a projected one-year budget deficit of more than $2 billion upon taking office in January.

Here are some highlights:

Stefanowski continued to argue for the eventual elimination of the personal income tax, claiming such a bold move will ultimately spark economic growth and create the revenue needed to boost spending on education. Lamont, meanwhile continued his argument that Stefanowski's plan would eliminate roughly $9 billion a year in state revenue, potentially decimating state programs.

Griebel, a former Republican who has teamed up with a Democratic running mate, said the personal income tax has to stay in place, calling it the "workhorse" of the state budget. He said taxpayers are more concerned about how their money is being spent.

Griebel, the former chairman of a now-defunct statewide transportation panel, argued for electronic tolling - the only one on stage to make such a strong pitch.

Lamont reiterated his plan to impose tolling on tractor trailers, similar to what's happening in neighboring Rhode Island. While it's being challenged in court by the trucking industry, Lamont argued it "makes good sense. Those trucks tear up our roads."

Stefanowski ignored Griebel's plan and focused his attention on again criticizing Lamont's truck toll idea, warning there will eventually be "80 tolls on I-95."

While Stefanowski gave President Donald Trump an "A'' in an earlier GOP primary debate, on Wednesday he shied away from grading his fellow businessman, only saying he likes his economic policies. He also declined to say whether U.S. Supreme Court Brett Kavanaugh should be confirmed for the nation's highest court, saying "I'm going to pass on that. That's a federal issue."

Lamont, who graded Trump an "F," said Kavanaugh should not be confirmed, given the sexual misconduct accusations he faces. He criticized Stefanowski after the debate for not taking a stand, arguing that the next governor is the "moral leader" of Connecticut.

Griebel, who graded Trump with a D-plus, said "the women who've come forward have to be heard" but Kavanaugh "also deserves a fair hearing."

Griebel used his first appearance with Stefanowski and Lamont to make a pitch for his independent candidacy. The former Republican has teamed up with former Democrat Monte Frank, an attorney, and collected enough signatures to petition his way onto the November ballot.

Griebel told the crowd that "only an independent governor can bring both parties together," along with the private sector, to help grow jobs. He urged the young first-time voters in the crowd to "take back Connecticut from the two-party system."