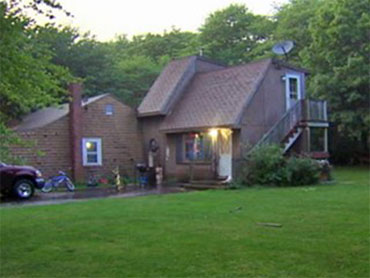 Debt is an American epidemic. More people are maxed out on their credit cards, going bankrupt or facing foreclosure than ever before. That's one reason "The Dave Ramsey Radio Show" is so popular. As we learned last fall, Dave helps people pay off their debts. 60 Minutes Correspondent Lesley Stahl reports.

With a degree in finance from the University of Tennessee, Dave Ramsey was a millionaire at 30 and again at 40 but, in between, he lost everything. Now he crusades against credit to a radio audience of 2 million and growing, offering a how-to, step-by-step plan to eliminate debt.

60 Minutes sat in on the show on a day when listeners called in to perform what Ramsey called an "on-air plastectomy," which means chopping up their credit cards. Kenny from Mississippi used a blender to chop up his seven credit cards.

Ramsey: "Hey, dude, you know that might break the blender, don't you think?"

Ramsey: "Does your wife know this is happening?"

And when the noise of the blender came, Ramsey commented, "I'll bet that next daiquiri tastes different. Way to go, Kenny!"

For three hours a day, Ramsey takes calls from listeners he calls "typical Americans," buried under student loans, car payments and over $30,000 on their credit cards.

"This is not a game," says Ramsey. "Debt has become a part of who we are. It's become that spoiled child in the grocery store with their lip stuck out: 'I want it. I want it. I deserve it because I breathe air.' And, well, that's an uphill climb in our culture right now, to go against that and say, 'Hey, let's be grownups here. Let's be mature, learn to delay pleasure, save up and pay for things.'"

Ramsey is tough on his listeners, but he's also a harsh critic of car dealers and bankers who hand out easy money and 5.2 billion credit card offers a year, even to people they know can't make the payments, playing on their self-esteem.

Companies will offer credit cards even to dogs and dead people. Ramsey says: "Consumers got to wake up and just say no."

He's a stand-up comic, a noodge about debt. Ramsey takes his show on the road, drawing in some 40,000 people a year, often in churches. His message is both old-fashioned and radical: Save money for a rainy day (as most Americans don't) and don't spend more than you earn (as most Americans do).The radio show bills itself as being about more than just personal finance and every day people call in with an emotional story or a desperate situation that is affecting their personal lives. Ramsey says he is not a trained counselor but, after 12 years of listening, he has heard it all.

60 Minutes replayed one recent call for him, from a woman named Joan, calling about her husband. They are deeply in debt.

Joan: "I know you don't advocate bankruptcy, but my husband is so depressed over our debt, and he's talking about it. I'm wondering if there's something we could do."

Ramsey: "He's talking about suicide. When did that happen?"

Ramsey: "Well. I'm not a counseling expert, but I will tell you, when someone talks about suicide, I go into emergency lifesaving mode. You get in high gear. Do you understand me?

Ramsey: "Your husband's life depends on your action right now."

Stahl says that it is almost as if Ramsey took Joan by the shoulders and had to shake her.

"Yeah. Well, she was in denial about how serious it is," Ramsey says. "The number one cause of male suicide is financial."

He says he knows because he has been there.

"I don't know if I was suicidal," Ramsey says, "but you do have that thought go through your head that 'I've …' you know, 'I've got a million-dollar life insurance policy. This could be more valuable to these kids and this wife than this idiot that's looking in the mirror.' That's a huge problem. It's an identity issue with guys."

Part of his appeal is his confession and his story as a one-time hotshot with his own real estate company, until he went belly up.

He was not saving any money at all. Says his wife, Sharon, "We didn't know how to save. No."

The Ramseys have been married for 22 years. He says, "We started with nothing. And, by the time we were 26, we had about $4 million worth of real estate."

In order to get into real estate, Ramsey says, "Oh, we borrowed to our eyeballs. I borrowed."

Then, the banks called in the notes. Dave and Sharon Ramsey found themselves with two little girls and $3 million worth of debt. They tried but, in the end, were unable to avoid bankruptcy.

Sharon Ramsey says she was "terrified ... Looking back, I mean, it was the most difficult time in our lives, in our marriage."

Says her husband, "Sharon and I, we didn't get a divorce. We held on to each other. But sometimes it was just to get a better grip." And they did not tell their family.

"There was a lot of shame and guilt tied with the subject of misbehaving with money," Dave Ramsey says. "Lots of people feel that. And it's a big secret. Lots of spouses hide it from their husbands or wives when they've goofed up and gone into credit card debt."

That's what happened with Steve and Stacey Burch of Houston. Before they became followers of Dave Ramsey, they were "spendaholics." They bought a Lexus, expensive jewelry and put in a pool. All the while, Steve, who runs a plumbing supply business, was secretly playing the stock market with their credit cards — until the debt hit $150,000.

"When this was revealed to me … it was devastating," Stacey says, "because I couldn't believe that I had been lied to."

Then, they enrolled in one of Ramsey's financial courses, in which people spend 13 weeks in night class, learning how to manage money. In their class, the Burches cut up their 15 credit cards and went from big spenders to big sellers.

"One of the things that Dave says is, 'Sell!' " Stacey says. "You know: 'Sell everything that's not bolted down!'"

They sold land, had garage sales, stopped eating out, stuck to a "no-frills, no-fun" budget, and they got rid of the Lexus. "I wanted my marriage more than anything," Steve says. "The car became worth nothing to me at that moment."

How much more do they have to pay off?

As for the Ramseys, today they are debt free. They don't even have a mortgage. He says he understands that most people need a mortgage loan to buy a house, though he says they should pay it off as quickly as possible. Even Ramsey's children — Denise, Rachel and Daniel — live by their father's "fitness plan."

When they turned 15, the girls got checkbooks and had to manage their own money. No credit cards or allowances for these kids; they get a "commission" for doing chores like making their beds and cleaning their rooms.

But they can't spend every penny. Following Dave Ramsey's method, they have to put money aside for saving and giving, and they have to live within their means.

Did his kids ever go to their father and say, "This isn't fair"?

So they would go to him and say, "Will you give me something for the movies?"

And he didn't give in.

Ramsey spells out his method in books, budget kits and videos, with instructions on belt tightening, budgeting and, above all, getting rid of all the plastic.

Ramsey says people shouldn't use credit cards even if they pay them off immediately and don't have the interest problems.

"The big thing you have to look at, though, is this: When you spend cash instead of spending plastic, you spend 12 to 18 percent less ... You know why?" he says. "Because cash hurts. You don't register the pain with plastic. I mean, you go buy a stereo, you start layin' out Uncle Benjamin on the counter, You're goin', 'Wait a minute. I want to think about this a minute. Whoa!' "

Ramsey knows he is up against the credit card industry, one of the most powerful industries in the United States.

"I'm not in the macro business. I'm in the micro business," he says, emphasizing that he reaches out to one person at a time. "But we'll see some shifts. For instance, this year, debit card charges outnumbered credit card charges for the first time ever."

Back in the radio studio with Ramsey, 60 Minutes listened as a bachelor named Fred from Nashville called in. He had sold his ski boat and two cars and was finally debt free.

Ramsey exhorted him to, "Scream 'I'm debt free' at the top of your lungs." And Fred did it.

Since our story aired last fall, Steve and Stacey Burch also have finished paying off all their debts, moved to Portland, Ore., and started teaching Dave Ramsey's method at their local church.