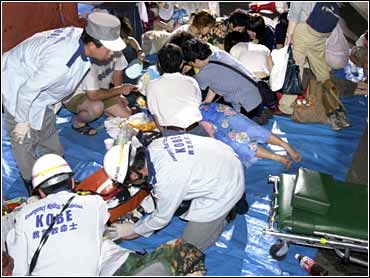 The call from a private security company was frantic: Thousands had mobbed a pedestrian overpass after a fireworks display in western Japan and lives were in danger.

Then came the police response - let's wait and see.

In those crucial minutes 10 people - most of them children - were killed and more than 100 injured when a crowd surged into the overpass Saturday night in Akashi, a suburb of Kobe about 630 kilometers (390 miles) southwest of Tokyo.

The accident - the worst overcrowding tragedy in Japan in decades - has focused intense scrutiny on allegedly lax crowed control at the site and what critics say was a laggard response by police.

Witnesses said officials seemed unprepared for the massive 130,000-strong mob that showed up for the display, and a report by a security company hired for the event said guards called the police for backup and were turned down.

"Right before the accident, there was a proposal asking for a group of police to go up to the bridge," Sakaki told reporters in Akashi on Sunday. "But the decision was to wait."

Sakaki, however, defended the police, saying that security companies had been hired to monitor traffic atop the pedestrian overpass and police were not responsible for that area.

He also said that plainclothes officers had checked out the situation a little while before and said it was "nonviolent."

Witnesses, however, said they could see trouble brewing from the start.

Survivor Noriko Yamaguchi said the platform was packed when she got off the train at Asagiri station - and it only got worse. She couldn't even get to the beach to see the fireworks and had to watch from the bridge.

Then the deadly pushing began.

"Everybody was panicking, it was really awful," Yamaguchi, 35, said on Sunday. "At one point, I started feeling dizzy and I thought I was going to die by falling on the ground and being trampled."

Yamaguchi and others said it was clear that authorities had not anticipated the size of the crowd, nor had they planned how to respond in the case of an emergency.

"I never felt death so close," said survivor Yoko Nozue. "The event should have been much better planned. I gasped for air and began to weaken. I almost fainted because I was pushed around."

Witnesses and the report by the Nishikan security company also said a group of unruly youths tried to push their way through the crowd, threatening people and creating a sense of chaos.

"Apparently they were so irritated by the slowly moving crowd they tried to ram their way through," said Yamaguchi, who went to the fireworks display and was caught on the bridge with a friend and her junior-high-school-aged son. None of them was injured.

The pedestrian bridge was packed before the fireworks began with people returning from a day at Okura Beach The six-meter (19.8-foot) wide bridge is the only direct link between the beach and the Asagiri train station on the other side of a thoroughfare.

Witnesses and the Nishikan report said a group of young men or teen-agers then got off the train and tried to push their way across the bridge and down to the beach. Some witnesses said the troublemakers had the brightly dyed hair common among young rebels
here.

Several rows of people stumbled and fell on one another, and the crowd surged over them, crushing or asphyxiating the victims. Riot police arrived and began to clear the crowd.

Panicked people caught in the pileup had to wait a reported 20-30 minutes for ambulances to make their way to the station through streets jammed with holiday traffic.

Officials in this coastal city of 270,000 apologized to the families of the victims - eight of whom were young children under the age of 10 - but said that it was still unclear what caused the accident.

In addition to 156 private security guards, there were 87 volunteers from city hall. Another 350 police officers were mobilized, said Masafumi Oshita, a spokesman for police in Hyogo Prefecture.

"I'm sure the victims' families are frustrated," Okada said after seeing the parents of victim Yuta Yanagihara, 9. "I told them we would do the best we can to take responsibility for the accident."

Meanwhile, the city assembly decided to set up a special committee to investigate the deaths, and said it would consider compensation to the victims' families based on the findings.

Saturday's accident may have been the deadliest of its kind since 1956, when more than 100 revelers were killed in a crush on New Year's Day at a shrine in western Niigata Prefecture, the Asahi newspaper reported.