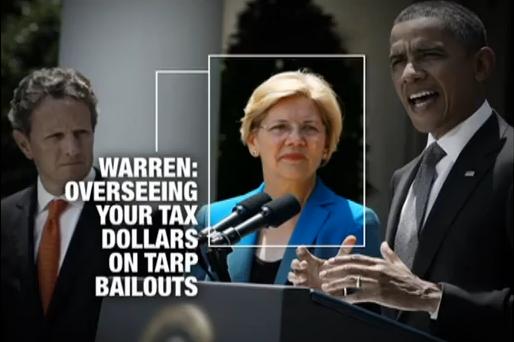 Just last month, Crossroads GPS released an ad targeting Massachusetts Senate candidate Elizabeth Warren as a champion of the "extreme left" and friend of the Occupy Wall Street movement - which, according to the ad, supports the "radical redistribution of wealth, and violence."

Now, the Karl Rove-linked organization is taking a different tack: In a new ad, which aired in Massachusetts starting Thursday, Crossroads GPS targets Warren for allegedly being beholden to Wall Street.

The 30-second spot, which was part of a $1.1 million dollar ad buy for four ads (concerning various candidates) that will be featured in Massachusetts, Missouri, Montana and Nebraska, features a brief clip of Warren pledging to "be a voice in the room on behalf of middle-class families."

"Really?" asks a narrator following the clip of Warren's remarks. "Congress had Warren oversee how your tax dollars were spent bailing out the same banks that helped cause the financial meltdown. Bailouts that helped pay big bonuses to bank executives while middle-class Americans lost out."

The ad goes on to accuse Warren of going on a "charm offensive" with some of the banks that got bailed out.

The Oklahoma native, who is running against incumbent Republican Senator Scott Brown in what is expected to be a tight and costly race, has become a hero of liberals for her advocacy on behalf of consumers against the big banks.

But just as a new Boston Herald poll shows Warren leading Brown by a seven point margin, her detractors are accusing her of being on the other side of the issue.

"Tell Professor Warren: We need more jobs, not more bailouts and bigger government," the narrator intones in the spot.

In 2008, Warren was indeed asked to head the congressional panel overseeing the billion $700 billion Trouble Asset Relief Program (TARP), which bailed out hundreds of banks and as well as insurers and automakers. But her appointment to that role was largely a product of her reputation as a tough critic of banks - and the conception that she would hold banks, as well as Treasury officials, accountable for the money that TARP had allocated.

In a 2009 interview with the Daily Beast, Warren emphasized her opposition to allowing banks to get "too big to fail."

"There are a lot of ways to regulate 'too big to fail' financial institutions: break them up, regulate them more closely, tax them more aggressively, insure them, and so on. And I'm totally in favor of increased regulatory scrutiny of these banks," she began. "But those are all regulatory tools. Regulations, over time, fail. I want to see Congress focus more on a credible system for liquidating the banks that are considered too big to fail."

Of the "charm offensive," the Crossroads GPS ad points to a March 2011 Politico article describing Warren's efforts to find "common ground" with the Chamber of Commerce and the Consumer Financial Protection Bureau (CFPB), a consumer watchdog agency created with the 2010 Dodd-Frank financial reform bill. Warren, who conceived of the CFPB and had at one point hoped to head it, reached out to a number of CFPB critics in an attempt to win over the opposition.

Still, she did not apologize for her pro-regulatory stance.

"Let's not pretend that a billion-dollar Ponzi scheme is attributable to too much regulation," Warren said in remarks at the Chamber of Commerce event referenced in the Politico story.

In a statement to Hotsheet, Warren spokesperson Kyle Sullivan called the Crossroads ad "ridiculous" and "desperate."

"Elizabeth was an outspoken critic of the bank bailout and its blank check to Wall Street. And that's just one fact that makes these ads ridiculous," Sullivan said. "The Wall Street bankers financing these attacks are desperate to stop Elizabeth Warren because she's worked so hard to stop Wall Street from ripping off middle class families."

He added: "Elizabeth's worked to keep both the banks and the government accountable. Those are the facts. The people of Massachusetts don't need more fast talk from Wall Street, they need a fighter like Elizabeth taking on Wall Street."

The latest on the House Jan. 6 investigation
Lucy Madison