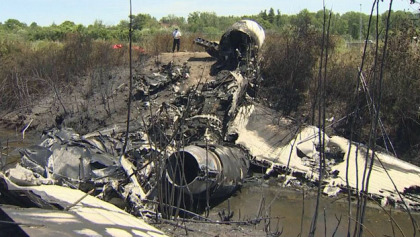 PHILADELPHIA -- The flight crew that died in a fiery crash aboard Philadelphia Inquirer co-owner Lewis Katz's private plane this weekend had flown for the millionaire businessman and philanthropist for nearly a decade, and among them was a pilot who survived an earlier fatal crash, relatives said Monday.

"I knew he was on a safe plane. I knew it was a well-maintained plane," de Vries' wife, Shelly, told The Associated Press. "I know the other captain had a great, long history, (and) was also a mechanic."

The rest of the victims were identified earlier Katz's neighbor at the New Jersey shore, Anne Leeds, a 74-year-old retired preschool teacher he invited on the trip just that day; Marcella Dalsey, the director of Katz's son's foundation; and Susan Asbell, 67, the wife of a former New Jersey county prosecutor.

The trip would be the last of several over the years the flight crew took with Katz; all three had worked for him for 10 to 15 years, relatives said. They had been expecting to take Katz, a sports team owner-turned-philanthropist, to France later this month, said Benhoff's husband, Dan.

The co-pilot, De Vries, had come to the U.S. from the Netherlands as a young man to attend flight school. In the early 1990s, he was a passenger in a two-man crash that killed a pilot at a southern New Jersey airport, his wife said.

So he had no fear, she said, and still loved to fly.

Katz had gone to Massachusetts on Saturday to attend an education-related event at the home of historian Doris Kearns Goodwin. He often would take spur-of-the-moment trips, and his crew was at the ready. Benhoff said his wife was on call all day, every day, and they spoke throughout the day Saturday.

"She loved to fly," he said. "She trusted that airplane."

Benhoff loved working for Katz, her husband said, and had gotten to know Katz's late wife, his children and grandchildren during their vacations, business trips and flights to and from family homes in Philadelphia; Palm Beach, Florida; the New Jersey shore; and New York.

The family of McDowell, the chief pilot, declined to comment.

Also killed in the crash was a next-door neighbor of Katz's, Anne Leeds, a 74-year-old retired preschool teacher he had invited to accompany him, and Marcella Dalsey, the director of Katz's son's foundation. A fourth person, Susan K. Asbell, 68, was identified by the Inquirer as having been among the dead. She was the wife of former Camden County, New Jersey, prosecutor Sam Asbell.

The last communication Longport, New Jersey Town Commissioner James Leeds heard from his wife Anne was a text message sent just minutes before she was killed, reports CBS Philadelphia. The text read, "We're at the airport, getting ready to go."

"She was a very kind person. She never said anything bad about anyone," said Leeds, speaking of his wife. "I am going to fall apart very quickly. It's been hard."

Meanwhile, CBS Boston reports that federal investigators were back at Hanscom Field Monday, trying to figure out what caused the Gulfstream jet to crash during takeoff late Saturday night.

In 911 calls released Monday, neighbors described a loud explosion and towering column of smoke. One caller Saturday night said it looked like "an atomic bomb went off" and described "a mushroom cloud" of smoke and fire.

At the crash site Monday, tire marks were visible where the jet ran off the runway at Hanscom Field in Bedford, Massachusetts. The plane had burst through a chain-link fence and toppled part of a runway lighting system.

The cockpit was burned but mostly intact, with the nose resting on a hill, and the burned-out fuselage lying in a ravine. The victims' bodies had been removed.

"It sounded as if you were standing next to a cannon or close to fireworks," said Mike Stevens, 42, who said he was visiting family in the area when he heard the crash and called police.

Katz, who was 72, made his fortune investing in parking lots and the New York Yankees' cable network. He once owned the NBA's New Jersey Nets and the NHL's New Jersey Devils and in 2012 became a minority investor in the Inquirer.

Less than a week before the crash, Katz and Harold H.F. "Gerry" Lenfest struck a deal to gain full control of the Inquirer as well as the Philadelphia Daily News and Philly.com by buying out their co-owners for $88 million.

A public memorial service for him was planned for Wednesday at Temple University in Philadelphia, where Katz was an alumnus and trustee.