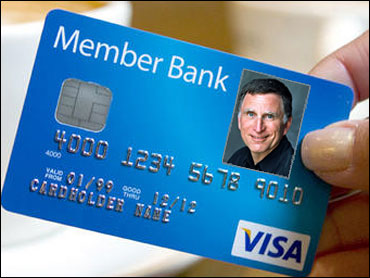 A few months ago, my wife and I decided that we had been spending too much money lately. We hadn't gone crazy. We're not particularly extravagant. We don't own a jet, we don't rush off to a private island when things get too hectic here, and I don't own a pair of "nice jeans" for the weekend. But we had noticed that gradually, over the past few years, we were inexplicably spending more money. I suggested that we try to go for a couple of months without using our credit cards, and just pay cash for everything. I felt this would make us more reluctant to buy things that we really didn't need. I was right. The experiment worked. We definitely spent less money. And I hated it.

Before deciding to put our credit cards aside, we went over our financial records. I pretended to be interested in all the details, and the conclusion was that there weren't any glaring areas where we could cut back. It wasn't as if all we had to do was lay off our upstairs maid and the butler and everything would be fine. Instead, it was all those little things that we buy and don't really think about that had been adding up.

So, we took a certain amount of money out of the bank and put the cash in a secret place in our house.

(CBS)
(Note to burglars: Since we no longer are doing the cash-only system, we don't keep cash in our house anymore. See map for directions.) We would each take some cash out of our stash whenever we felt we needed to replenish the money in our wallets. However, we'd be very careful about those "withdrawals" because the money in our hiding place would have to last the entire month.

I had never been in the habit of carrying much cash on me. I would usually just have a few dollars stuffed in one of my pockets. I had my credit cards, and I thought — incorrectly, as it turned out — that I rarely spent money, anyway. When I started to carry cash, I actually felt a difference in me. I'm sure I walked with a swagger. I had become a "Big Time, Charlie Potatoes" with money in my wallet. I was living large, and for me, it was all about the "Jacksons" I was carrying.

I didn't part too easily with any of those "Jacksons" or "Hamiltons" or even my "Washingtons." I learned very quickly what the owner of every casino in the world knows — people are much more likely to spend money if it's not really money, but plastic. If you were actually putting cash on the table and losing at blackjack, you'd stop playing a lot sooner than when you're just losing those plastic chips.

Similarly, when we pay for something with a plastic credit card, it doesn't "hurt" as much as actually reaching into our wallets and handing over our cash to a stranger.

As I said, the cash-only system worked. I was much more likely to ask myself the question, "Do I really need this?" before I bought something.

Since it worked so well, why did I hate our "no credit card" system? For one thing, I felt like I was a kid on an allowance. I resented that I couldn't buy whatever I wanted. And there was guilt attached to every purchase — "Should I really be buying this?" "If I do, will that mean I'll have to take more money out of our hiding place?" "If I buy it, does this mean I'm an irresponsible person with no self-control who is a poor role model for my children and a bad citizen of the world?" (Sometimes, I'm a little rough on myself.)

After two months, we decided, thankfully, that we had learned how to spend money more wisely, and we could go back to a more normal, relaxed "sometimes credit card, sometimes cash" system.

But the damage had already been done. Even though I am now "allowed" to make an impulse purchase with my credit card, the leftover guilt from the two-month experiment stops that purchase from being a joyous one. It's no fun to be responsible.

I think the only thing that would get me out of this mood is if we would go out and have a ridiculously expensive evening, throwing our money around extravagantly, celebrating the fact that we have learned how to be responsible with our money.

Lloyd Garver has written for many television shows, ranging from "Sesame Street" to "Family Ties" to "Frasier." He has also read many books, and paid cash for some of them.