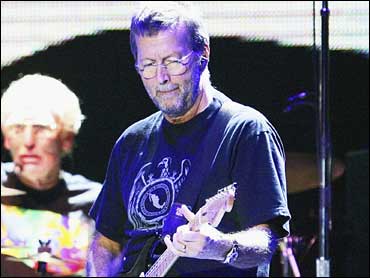 Jack Bruce says Cream is once again rising to the top.

The bassist for the legendary rock group told The Associated Press on Thursday that he agreed recently to play an unspecified show or shows later this year with guitarist Eric Clapton and drummer Ginger Baker.

Bruce would not say when the reunion would occur, but that it would not be the seven-continent Live Earth shows on July 7: "It's a bit later than that."

Bruce recently told the Scotsman newspaper there was no chance the band would reunite because of long-standing tension between him and Baker.

"Then, the next day, it came up we're doing something if I wanted to. Obviously, I'm not going to be the one to say no," Bruce told the AP during an appearance at the Rock and Roll Fantasy Camp.

Representatives for Clapton and Baker have not confirmed the reunion.

Infighting and ego clashes between Baker and Bruce go back decades, with Baker once firing his drum sticks at Bruce during a show and Bruce upending Baker's drum kit.

Clapton persuaded Bruce and Baker to reunite in 2005 after a 37-year split. But the ill will resurfaced, with Baker accusing Bruce of turning up his bass to deafening levels during a Madison Square Garden show, and Clapton appeared uncomfortable on stage.

However, Bruce played those 2005 shows about a year after receiving a liver transplant that kept him alive. He hopes another Cream reunion would be less physically and mentally stressful.

"I hadn't recovered properly yet, so I found it quite difficult," Bruce said. "Now I'm completely recovered so I would enjoy it more."

Bruce made an infrequent performance Thursday, playing Cream's "Sunshine of Your Love" and "White Room" with former Kiss guitarist Bruce Kulick, Bad Company drummer Simon Kirke and Queen keyboardist Spike Edney before about 75 spectators at the Fantasy Camp. Bruce also played Cream songs with the camp's amateur bands, composed of about 50 rock fans who paid upward of $15,000 each for the privilege.