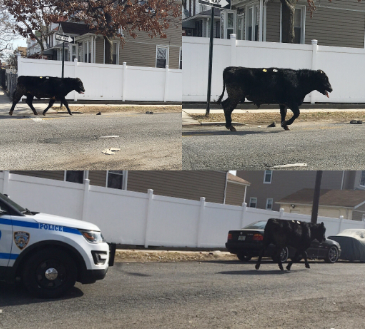 NEW YORK -- There is a sad ending to the tale of a cow on the loose in Queens, CBS New York reports.

The animal died hours after escaping from a slaughterhouse and roaming the streets in Jamaica, a neighborhood in the New York City borough, Tuesday morning.

The cause of death has not been determined.

A butcher at the facility told CBS New York they were moving a large group of animals and he believes this one may have heard a noise, got scared and escaped through the fencing.

The cow — or some reports say, bull — was hit with several tranquilizer darts, but it managed to continue to make its way through neighborhood for some time before being captured in a backyard.

The animal was loaded into a trailer to be taken to the Center for Animal Care and Control in Brooklyn. However, it died en route, officials said.

While cows are hardly a common sight in the city, this sort of thing has happened before. Just last month, a cow escaped from the slaughterhouse in Jamaica, Queens and led police on a wild chase.

Dashcam video posted to Twitter showed that cow running through an intersection in the New York City borough. The animal was tracked down at a parking garage. The cow was named “Freddie” for Freddie Mercury, because he came from Queens, and sings... well, “moos.” Freddie was spared and taken to an animal sanctuary.

Despite the previous incident, residents were still shocked to see the animal in Queens on Tuesday, according to CBS New York.

“It was the running of the bulls today from what I understand,” said resident Felicia Evans.