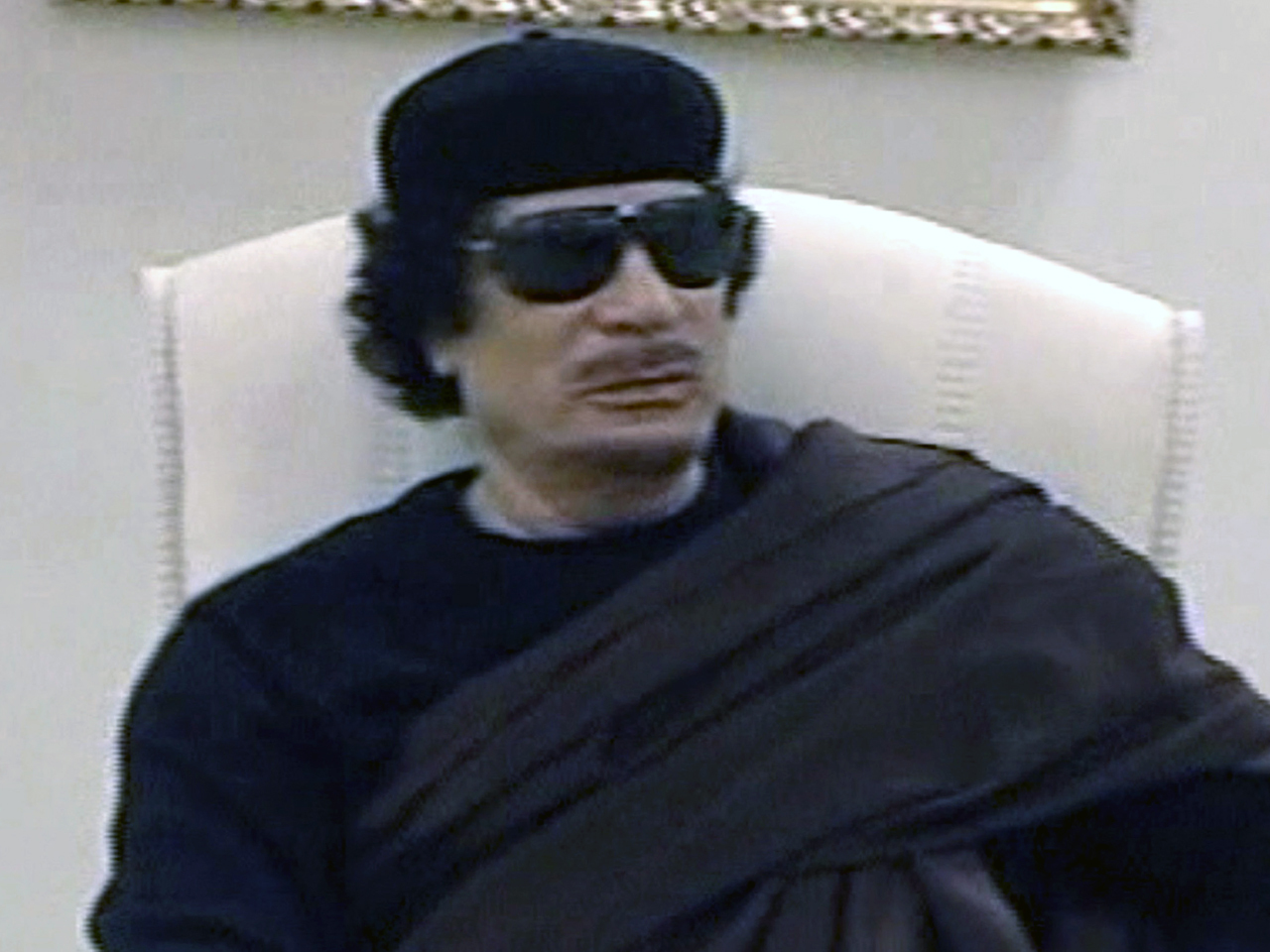 The prosecutor of the International Criminal Court says he will seek arrest warrants on Monday for three senior Libyan leaders for murder and persecution.

Luis Moreno Ocampo has not released the names of the suspects, but Libyan leader Muammar Qaddafi is expected to be among them. The court said it would reveal the individuals' identities and provide further details at a press conference Monday.

Italian foreign minister Franco Frattini said Friday that Qaddafi may have fled Tripoli but is likely still in Libya, amid specualation that he might have fled in light of the developments.

Frattini said "international pressure has likely provoked the decision by Qaddafi to seek refuge in a safe place." The comments came during a TV interview with Corriere della Sera that was posted on the newspaper's website.

Qaddafi's compound has been a frequent site of NATO-led airstrikes, including an attack on April 30 where he is believed to have been inside but have escaped unharmed. Seeking to quell speculation he might have been killed, Libyan state TV this week showed Qaddafi meeting tribal leaders, apparently in a Tripoli hotel on Wednesday.

Frattini said he had "many doubts that that footage had been made that day and especially in Tripoli."

NATO, meanwhile, launched more airstrikes Friday in Tripoli as Qaddafi's regime faced open defiance on the ground, with activists reporting gunfights between protesters and soldiers in several of the capital's neighborhoods.

The protests, coupled with worsening shortages of fuel and other goods, have prompted Qaddafi's rebel opponents to predict that his hold on the capital may be in jeopardy.

The sound of two airstrikes could be heard in Tripoli early Friday, though it was not immediately clear what they targeted.

On Thursday, Qaddafi's fortified compound in the capital was among the targets as NATO carried out 52 strike missions across Libya. Other targets included anti-aircraft missile launchers near Tripoli and several buildings and gun emplacements being used by regime forces in their siege of the rebel-held port city of Misrata.

Diplomatic pressure also ratcheted up. In Washington, a rebel delegation was meeting Friday with officials at the White House.

An anti-government activist in Tripoli, interviewed Friday, said protests have occurred this week in at least three neighborhoods in the city, accompanied by exchanges of gunfire between opposition activists and Qaddafi forces.

In one neighborhood, Fashloum, the activist said he saw soldiers flooding the area and patrolling the streets in vehicles. He said he did not personally see a demonstration there but heard from other activists that there was a brief gunbattle.

The crackle of gunfire could be heard in a separate neighborhood close to a hotel where foreign reporters reside.

The activist's report echoed those made earlier to The Associated Press by a local journalist and resident on Thursday. All spoke on condition of anonymity out of fear of reprisals.

Reporters cannot independently confirm the information because they may not leave their Tripoli hotel without government minders.

When residents of Tripoli tried to protest Qaddafi earlier in the uprising, gunmen in speeding cars tore through and fired wildly into the crowds, making many fearful to go out in the streets and demonstrate.

The activist said residents are deeply frustrated by a severe fuel shortage that forces some motorists to spend up to three days in line at gas stations. Such lines are visible to reporters when they are shipped around on buses.

He added there were severe shortages in medicine, and the price of some basic foods had doubled or tripled. The activist said a certain cholesterol medicine was no longer available in Tripoli, and asthma medicine had doubled in price to 60 Libyan dinars ($50). He said the price of vegetable oil quadrupled from less than 1 dinar to 4 (81 cents to $3.30), and the price of pasta also rose from half a dinar to 2 dinars (40 cents to $1.60).

The head of the rebels' transitional government, Mustafa Abdul-Jalil, said during a high-level visit to London this week that Qaddafi opponents in Tripoli were in the process of acquiring weapons and predicted they would eventually contest regime forces in the capital.

The rebels control most of eastern Libya, while Qaddafi controls most of the west, including Tripoli. Misrata — about 125 miles (200 kilometers) southeast of Tripoli — is the only rebel stronghold in the west. Local doctors say more than 1,000 of its residents have been killed in the fighting and shelling during the siege by Qaddafi's forces.

In an update on Misrata, NATO said Friday there had been a "significant improvement" for the rebel side over the past three days — in part because of NATO airetsikes on regime forces near the city.

"Yesterday (Thursday) there were no known attacks on the city and the port," said Wing Cmdr. Mike Bracken, an alliance spokesman. "In contrast, 25 days ago there were tanks and guns on the street of Misrata. That is no longer the case."

Bracken said he could not confirm reports that rebel forces had taken Misrata's airport, several miles (kilometers) south of the city center.

The International Organization for Migration said Friday is has been airlifting hundreds of migrants who had fled Libya and were stranded in remote areas in Northern Chad. The IOM said more than 1,500 migrants had been flown to the Chadian cities of Abeche or N'Djamena, where medical care is available.

Since the start of the Libyan conflict, more than 23,500 migrants, mainly Chadians, have arrived in the northern Chadian towns of Faya and Kalait after a grueling journey across the Sahara in open trucks with minimal food and water, the IOM said.

In all, the IOM said, about 770,000 migrants and Libyans have fled into Algeria, Chad, Egypt, Niger, Tunisia and Sudan or crossed the Mediterranean to reach Italy and Malta since mid-February.

In Geneva, the U.N. refugee agency said three men have been found in a Tunisian refugee camp who survived a harrowing odyssey from Libya resulted in dozens of deaths from thirst and starvation.

Melissa Fleming, a spokeswoman for the U.N. High Commissioner for Refugees, said the men's account to aid workers confirms that the vessel carrying sub-Saharan migrants from Libya to Italy encountered military units who refused to help.

She says 63 of the 72 people on board died, including all the women and children.