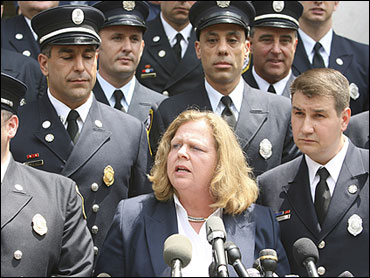 The Supreme Court ruled Monday that white firefighters in New Haven, Conn., were unfairly denied promotions because of their race, reversing a decision that high court nominee Sonia Sotomayor endorsed as an appeals court judge.

New Haven was wrong to scrap a promotion exam because no African-Americans and only two Hispanic firefighters were likely to be made lieutenants or captains based on the results, the court said Monday in a 5-4 decision.

The controversy started when New Haven voided its entire 2003 promotional exam after the results made 18 whites - but no blacks - eligible to become officers. When the city decided to promote no one, the white firefighters called that invalid under the Constitution.

The city said it acted because it might have been vulnerable to claims that the exam had a "disparate impact" on minorities in violation of the Civil Rights Act of 1964, and sought to avoid lawsuit from minorities who were turned down following the test.
When the case reached the appeals court Judge (now Supreme Court nominee) Sonia Sotomayor was on the three-judge panel that unanimously rejected the reverse discrimination complaint.

"Fear of litigation alone cannot justify the City's reliance on race to the detriment of individuals who passed the examinations and qualified for promotions," wrote Justice Anthony Kennedy. "Discarding the test results was impermissible under Title VII, and summary judgment is appropriate for petitioners on their disparate-treatment claim." Justices Kennedy was joined by Chief Justice John Roberts and Justices Samuel Alito, Antonin Scalia and Clarence Thomas.

Even if the city was trying to protect minorities against an unfair test, Kennedy wrote, "There is no substantial basis in evidence (this) test was deficient."

Title VII prohibits both intentional acts of employment discrimination based on race, color, religion sex and national origin (or disparate treatment), and policies or practices that intentional or not have a disproportionately adverse discriminatory effect on minorities (or disparate impact).

Under Title VII, an employer can engage in an act of intentional discrimination for the purposes of avoiding or remedying a disparate impact only if there is evidence that the employer would be subject to disparate-impact liability. The Justices did not feel New Haven's action rose to that level.

The ruling could alter employment practices nationwide, potentially limiting the circumstances in which employers can be held liable for decisions when there is no evidence of intentional discrimination against minorities.

New Haven's Mayor said the city would respect the decision - but complained it overturned 38 years of civil rights law, which forbid hiring practices that caused a "disparate impact against minorities".

Civil rights leaders also predicted an era of confusion over when minorities are protected and when they are not.

In dissent, Justice Ruth Bader Ginsburg said the white firefighters "understandably attract this court's sympathy. But they had no vested right to promotion. Nor have other persons received promotions in preference to them."

Ginsburg said that "it is indeed regrettable that the City's noncertification decision would have required all candidates to go through another selection process. But it would have been more regrettable to rely on flawed exams to shut out candidates who may well have the command presence and other qualities needed to excel as fire officers. Yet that is the choice the Court makes today. It is a choice that breaks the promise of Griggs that groups long denied equal opportunity would not be held back by tests 'fair in form, but discriminatory in operation.'"

She was joined in dissent by Justices Stephen Breyer, David Souter and John Paul Stevens.

CBS News legal analyst Andrew Cohen notes that "It's an embarrassment for Sotomayor, for sure. She's just been reversed on appeal and no judge ever wants that to happen. But it's important to note that four justices on the court agree with her, in whole or in part, so it's not as if her lower court ruling was outside the mainstream or completely implausible.

"Sotomayor's detractors will claim that this ruling is proof that she's outside of the mainstream when it comes to affirmative action cases," Cohen writes. "Her supporters will counter that the case was narrowly decided 5-4 and that all lower federal appeals court judges get reversed from time to time.

Kennedy's opinion made only passing reference to the work of Sotomayor and the other two judges on the 2nd U.S. Circuit Court of Appeals who upheld a lower court ruling in favor of New Haven.

But the appellate judges have been criticized for producing a cursory opinion that failed to deal with "indisputably complex and far from well-settled" questions, in the words of another appeals court judge, Sotomayor mentor Jose Cabranes.

"This perfunctory disposition rests uneasily with the weighty issues presented by this appeal," Cabranes said, in a dissent from the full 2nd Circuit's decision not to hear the case.

A CBS News/New York Times Poll, conducted June 12-16, found 50% in favor of programs that make special efforts to help minorities get ahead, with 41% opposed. For over a decade more Americans have favored affirmative action programs than opposed them.

However, the high court in a decision on Monday said that an attorney general can get a court to issue subpoenas in an investigation into those financial institutions.

Federal courts have so far blocked an investigation begun by New York, which is backed by the other 49 states, of whether minorities were being charged higher interest rates on home mortgage loans by national banks with branches in New York.

In the dispute, the Obama administration said federal law prohibits states from looking at the lending practices of those banks, even under state anti-discrimination laws.

President Barack Obama's proposed overhaul of financial regulation could make the outcome of the case less important. The proposal would create a consumer protection office and states would be empowered to enforce their own laws, with some degree of coordination with the new federal agency.

The 5-4 opinion was written by Justice Scalia; Justice Thomas, joined by Chief Justice Roberts and Justices Kennedy and Alito, filed an opinion concurring in part and dissenting in part.

In another case, the court is postponing a decision on whether a movie that was critical of Hillary Rodham Clinton during her presidential campaign should be regulated as a campaign ad. It has decided to reargue the case of Citizens United v. Federal Election Commission (08-205) in its next term.

The Federal Election Commission and a lower court in Washington have said the not-for-profit group, Citizens United, must abide by campaign finance restrictions when it wanted to advertise and distribute a scathing 90-minute documentary about the former New York senator and current secretary of state without complying with federal campaign finance law.

The Supreme Court has refused to allow victims of the Sept. 11 attacks to pursue lawsuits against Saudi Arabia and four of its princes over charitable donations that were allegedly funneled to al Qaeda.

The court, in an order Monday, is leaving in place the ruling of a federal appeals court that the country and the princes are protected by sovereign immunity, which generally means that foreign countries can't be sued in American courts.

The Supreme Court agreed Monday to decide in its upcoming term whether the National Football League and its 32 teams can enter an exclusive licensing deal with a maker of team jerseys and other gear without violating federal antitrust law.

The court said it will hear an appeal from American Needle Inc., of Buffalo Grove, Ill., that challenges an agreement the NFL struck with Reebok International Ltd. American Needle had been one of many firms that manufactured NFL headwear until the league granted an exclusive contract to Reebok in 2001.

The NFL won the case in the federal appeals court in Chicago. But it also asked the Supreme Court to hear the case in a quest for a more sweeping decision that could put an end to what the league considers costly, frivolous antitrust lawsuits.

The case concerns whether the league is essentially a "single entity" that can act collectively or 32 distinct businesses that must be careful about running afoul of antitrust laws by working too closely together.

Other than Major League Baseball, which has an antitrust exemption dating to 1922, the other sports leagues have an intense interest in the case. The National Basketball Association and the National Hockey League both asked the court to rule in favor of the NFL.

The case will be argued late this year or early in 2010.

The court rejected bids to hear appeals on several cases, including one by Hollywood studios and television networks seeking to block the use of a new digital video recorder system that could make it cheaper and easier for viewers to record shows and watch them when they want, without commercials.

The justices, in an order Monday, say they will not disturb a federal appeals court ruling that Cablevision Systems Corp.'s remote-storage DVR does not violate copyright laws. The action means that Cablevision and perhaps other cable system operators soon will be able to offer DVR service without need for a box in consumers' homes.

The justices also left in place a court order barring Missouri from enforcing a law limiting protests near funerals. The court refused without comment Monday to hear Missouri's appeal. The state enacted a law aimed at religious picketers who have turned up at soldiers' funerals.

Members of the Westboro Baptist Church in Topeka, Kan., claim God allows soldiers to be killed as punishment for the nation's sins, including homosexuality, divorce and remarriage, idolatry and greed. Church member Shirley Phelps-Roper persuaded the 8th U.S. Circuit Court of Appeals in St. Louis to issue an order barring enforcement of the law while a federal judge considers whether it is constitutional.

The Supreme Court also won't stop the state of New Hampshire from making doctors' prescription-writing habits confidential over the objection of companies who analyze and sell that information.

The high court on Monday refused to hear an appeal from IMS Health Inc., of Norwalk, Conn.; and Verispan LLC, of Yardley, Pa. Those two companies collect, analyze and sell prescription information. They say the law violates their First Amendment right to free speech in pursuit of their business.