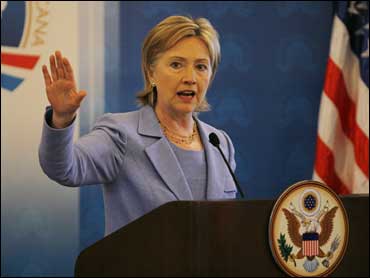 The Supreme Court has failed to decide on whether a scathing documentary about Hillary Rodham Clinton that was shown during the presidential race should be regulated as if it were a campaign ad.

The court said Monday it will hear arguments in the case again in a special session on Sept. 9. The justices said they want lawyers to address whether the court should overturn its earlier rulings on limiting corporate and union contributions in federal elections.

Citizens United, a conservative not-for-profit group, wanted to air ads for the movie in Democratic primary states and also make the film available to cable subscribers on demand without complying with federal campaign finance law.

But lower courts have said the movie looked and sounded like a long campaign ad, and therefore should be regulated like one.

At the time of "Hillary: The Movie," the New York senator was competing with Barack Obama for the Democratic presidential nomination. She is now secretary of state in the Obama administration.

The court's composition will be different by the time it rehears the case. Justice David Souter plans to retire this month, and Obama has nominated Sonia Sotomayor, a judge from the 2nd U.S. Circuit Court of Appeals, to replace him.

Obama and Democrats hope the Senate confirms Sotomayor before the high court session in September.

The movie is unquestionably anti-Clinton, featuring commentary from conservative pundits, some of whom specifically say she was not fit to be commander in chief. One scene, which was used in an ad, shows Dick Morris describing the senator as "the closest thing we have in America to a European socialist."

Morris, who once served as an adviser to former President Bill Clinton, is now one of the Clintons' harshest critics.

Citizens United wanted to pay for its documentary to be shown on home video-on-demand, and for ads promoting the movie to be shown in competitive Democratic primary states.

Federal judges, however, said the movie should be regulated by the McCain-Feingold law, the popular name for 2002 revisions to the nation's campaign finance law. Judges called "Hillary: The Movie" a 90-minute attack ad, rulings that would require Citizens United to identify the financial backers for the ads if they were to appear on television.

The movie was advertised on the Internet, sold on DVD and shown in a few theaters. Campaign regulations do not apply to DVDs, theaters or the Internet.