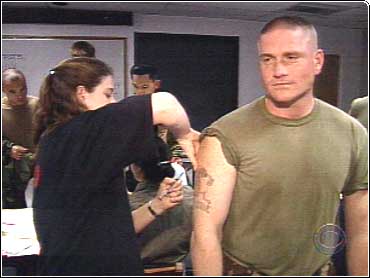 Air Force Maj. Sonnie Bates went to work Friday knowing his 13-year career in the military may be over.

CBS News Correspondent Vince Gonzales reports Bates, who is stationed at Dover Air Force Base in Delaware, was summoned before his commanding officer Friday and told he is the first U.S. military officer facing court-martial for refusing a vaccine designed to protect against the deadly biological warfare agent anthrax.

Bates says he "never thought I'd be singled out for not following an order."

Bates refused the shot because many of his comrades got sick after being vaccinated. "It wasn't a difficult decision at all because I feel like I have a higher order to follow," he explains, "and that is to stand up against things that are wrong."

According to Col. Harvey Crowder, the chief of preventive medicine with the USAF Surgeon General's Office, "I think that good order and discipline is the key for military units to operate effectively. As a former commander, I continue to believe that this is a safe vaccine that's lawfully ordered to be given to protect someone against a fatal disease."

But there are problems at Dover. Medical records obtained by CBS News show more than 100 service members reported the vaccine made them ill. Some pilots became so sick they were grounded. Others developed possible long-term health conditions.

Bates says a minimum of 15 people in his squadron are sick, with unusual symptoms similar to those associated with Gulf War Syndrome. What's more, he says, "A lot of the doctors are telling them it's psychological -- put them on Prozac or tell them they're malingerers."

"And I have reports," Bates adds, "that people themselves -- first-hand knowledge -- have come to me and said 'Major, the doctor told me if I talk about anthrax that I'll be facing a medical discharge.'"

Service members shouldn't be afraid to come forward, Crowder insists. "We encourage every person with an adverse reaction to report," he says. "It's important to have a full spectrum of data available and if there's a problem, to get them taken care of."

In the case of Dover, Crowder explains, "When we look at the disease patterns and disease rates they are no different in Dover than they are in the rest of the United States Air Force."

Meanwhile, the only plant in the country licensed to produce the vaccine remains shut down due to quality concerns. The FDA re-inspected the plant in November and found many violations still uncorrected.

The Pentagon insists the vaccine is safe -- but Bates isn't buying it. He thinks, "There's a difference between being willing to give your life and sacrificing your health over a mismanaged government contract."

If convicted, Bates faces up to five years in prison. Given the venue he's prepared for a conviction, but hopes to one day bring his case to a civilian court. "And they'll hopefully come t reason that service members do have rights," he says. "That we shouldn't be expected to take questionable drugs into our own bodies without informed consent."

Republicans warning of army of 87,000 IRS agents that will harass Americans
Thanks for reading CBS NEWS.
Create your free account or log in
for more features.
View CBS News In
CBS News App Open
Chrome Safari Continue
Be the first to know
Get browser notifications for breaking news, live events, and exclusive reporting.