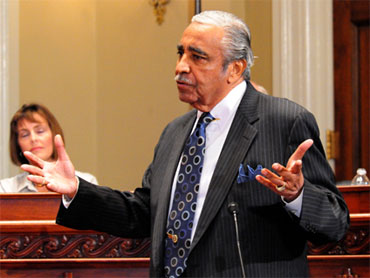 Chief counsel Blake Chisam called for the punishment despite the veteran New York congressman's plea, in a prepared statement in advance of the hearing, for "a drop of fairness and mercy."

If Chisam's recommendation is carried out, it would be the most serious punishment short of expulsion that could be meted out by the House. Chisam and Rangel argued their positions at a public hearing on sanctions, where the 80-year-old congressman acknowledged making mistakes in handling his finances and said he wasn't there to "retry this case."

He did say he wished the committee would weigh, in considering its vote on punishment, how the House had handled previous cases involving lawmakers who were enriched by activities they undertook that were judged to be in violation of the chamber's rules.

Rangel on Tuesday was found guilty of 11 of the 13 charges of ethics violations against him by a panel of four Democrats and four Republicans.

That finding came after a two-year long investigation into charges against Rangel that relate to his personal finances and his fundraising efforts for a new center at New York City College. The trial marked a rare event: In the two decades since the House's ethics procedures were adopted, only former Rep. James Traficant (D-Ohio) faced a similar trial. He was expelled from Congress after being convicted of 10 felony counts.

In a statement Thursday afternoon, Rangel apologized for "the embarrassment I have brought upon this body that I love dearly, and to the Members of Congress, and to my family and constituents."

"There has never been any corruption or personal gain in my actions as the Committee's chief counsel noted," he said. "Neither has there been any intent on my part to violate the House rules. My actions may have been sloppy, or even stupid, but never corrupt."

"There is no excuse for my acts of omission and failures to abide by the rules of Congress," Rangel continued. "I have made many mistakes that I will forever regret, and I apologize for them."

A censure or a reprimand is a legislative procedure where the full House, by majority vote on a simple resolution, expresses a formal disapproval of the conduct of a member, according to the Congressional Research Service.

The censured representative generally must stand before the House and receive the rebuke, but entails no actual loss of privileges. However, "the two political parties in the House themselves have adopted their own internal party rules which in recent years have generally barred from the chairmanship of committees and subcommittees" during that session of Congress, according to CRS.

Rangel spoke calmly without notes as he faced the committee Thursday. He repeatedly denied he was corrupt or crooked, sparking a clash with Rep. Michael McCaul, R-Texas.

McCaul questioned whether Rangel's conduct was, in fact, corrupt.

He noted that Rangel targeted donors for a college center named after him, people who had legislative issues that Rangel could influence in the Ways and Means Committee.

"Failure to pay taxes for 17 years. What is that?" McCaul asked. He noted that former Rep. James Traficant, who was expelled after a felony conviction, didn't pay taxes for just two years.

Rangel argued, "City College (of New York) came to me to use my name. I was not trying to criminally hide anything from the IRS and Congress."

He said he didn't know the landlord of his New York apartment building placed him on a special handling list, when Rangel set up a campaign office in a subsidized unit designated for residential use.

Before Chisam commenced his remarks, Rep. Jo Bonner, R-Ala., told committee colleagues that Rangel needed only to "look in the mirror to know who to blame" for his predicament.

Chisam said Rangel "brought discredit" upon the House and that his actions "served to undermine public confidence in this institution."

The committee recess for a floor vote and planned to reconvene later Thursday to continue discussion and hold a closed session to discuss Chisam's recommendation.

Rangel also brought in Rep. John Lewis, the Georgia Democrat, to give a testimonial for the congressman to the panel. Lewis called his colleague "a good and decent man" and said he had worked tirelessly to advance civil rights.

The hearing to consider the charges against Rangel began Monday, but Rangel walked out of the proceedings in protest because he has been unable to acquire legal representation.
Rangel's legal team dropped the case this fall, reportedly after disagreements with Rangel over their defense strategy. Rangel had already spent $2 million of campaign funds on his defense.

Rangel is a 20-term Democrats from New York's famed Harlem neighborhood. His career peaked in 2007 when he became chairman of the powerful Ways and Means Committee. It took a dive last March, when he relinquished that post after his corporate-funded travel was criticized in a separate ethics case.

The ethics trial was an embarrassment for Democrats who are still reeling from losing their majority in the House to Republicans in Nov. 2 elections.

But Rangel bested a crowded primary field in September and went on to easily win reelection in heavily Democratic New York, in spite of the charges.

The longtime lawmaker has stood firm in the face of pressure to resign, both from the GOP and from some within his own party.

In his statement, Rangel said "This has been one of the most difficult days of my life."

"All of this has been brought upon me as a result of my own actions," he said. "In the end, I hope that you would judge me on my entire record as a soldier and a dedicated public servant -- not by my mistakes."