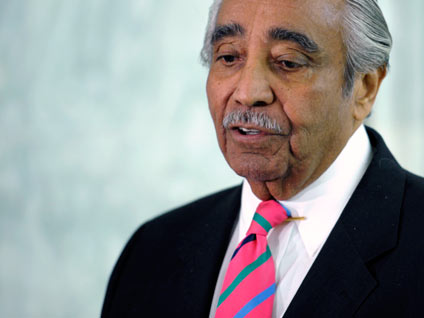 In a rambling statement before the House ethics committee on Thursday, Democratic Rep. Charles Rangel admitted to "irresponsible behavior" but was adamant that he was not corrupt.

Rangel asked the committee to discount allegations that he is "a crook" and "corrupt," arguing that "in all of this there was no request or suggestion...of corruption."

He said he was not trying to retry the case, only asking the committee to be fair.

In a seperate written statement released late Thursday afternoon, Rangel apologized for "the embarrassment I have brought upon this body that I love dearly, and to the Members of Congress, and to my family and constituents."

"There has never been any corruption or personal gain in my actions as the Committee's chief counsel noted," he said. "Neither has there been any intent on my part to violate the House rules. My actions may have been sloppy, or even stupid, but never corrupt."

"There is no excuse for my acts of omission and failures to abide by the rules of Congress," Rangel continued. "I have made many mistakes that I will forever regret, and I apologize for them."

Rangel wrote that "this has been one of the most difficult days of my life."

"All of this has been brought upon me as a result of my own actions," he said in the statement. "In the end, I hope that you would judge me on my entire record as a soldier and a dedicated public servant -- not by my mistakes."

Rangel acknowledging to the Ethics committee that those charges for which he had been found guilty were serious enough to warrant the hearing. He added, however, that he hoped the committee would help "clear the racket as to what I did not do."

A House ethics panel of eight representatives (four from each party) found Rangel guilty on Tuesday of 11 counts of House ethics violations, for charges including submitting misleading annual disclosures of his income and assets and the use of a subsidized New York apartment - designated for residential use - as a campaign office.

Blake Chisam, chief counsel to the House ethics committee, recommended that Rangel be censured for bringing discredit to the house and serving to "undermine public trust in this institution."

"Rangel should only look into the mirror if he wants to know who to blame," Bonner said.

"I look at myself every morning, Mr. Bonner," Rangel responded, in his testimony. "I have never blamed staff, my family, or anyone for my irresponsible behavior," he said.

"I admitted wrongdoing to my committee - and it wasn't my fault that this committee decided to have this hearing on the eve of my primary, or the eve of the general election," Rangel said.

"I hope Mr. Bonner in his statement did not imply my lack of love for my country or this congress," he added.

After the hearing, the full ethics committee proceeded into a closed session to consider the punishment. Next to expulsion, censure is the most serious punishment that the House can administer to a congressman.

Watch footage of Rangel's remarks below: