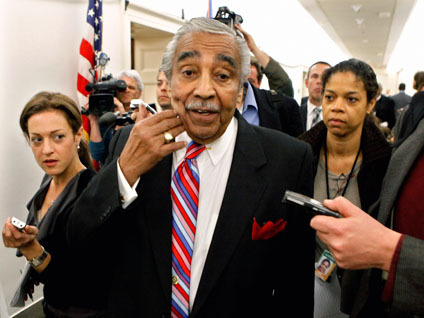 A House ethics committee subpanel today found Democratic Rep. Charlie Rangel guilty of 11 of the 13 charges of ethics violations against him.

The panel, composed of four Democrats and four Republicans, emerged after private deliberation to announce their findings.

"This has been a difficult assignment," committee chair Rep. Zoe Lofgren (D-Calif.) said. "We have tried to act with fairness, led only by the facts and the law, and I believe we have accomplished that mission."

The subpanel will now submit its findings to the full ethics committee, which will schedule a public hearing to determine the appropriate sanctions to take against the longtime New York representative. Whatever action they decide on during the sanctions hearing will then go to the full House of Representatives. The committee could go so far as to recommend expelling Rangel, but that would be unlikely. Other possible sanctions include a House vote deploring Rangel's conduct, a fine or a denial of privileges.

The subpanel's decision comes after a two-year long investigation into charges against Rangel that relate to his personal finances and his fundraising efforts for a new center at New York City College. The trial marked a rare event: In the two decades since the House's ethics procedures were adopted, only former Rep. James Traficant (D-Ohio) faced a similar trial. He was expelled from Congress after being convicted of 10 felony counts.

The hearing to consider the charges against Rangel began yesterday, but Rangel walked out of the proceedings in protest because he has been unable to acquire legal representation. Rangel's legal team dropped the case this fall, reportedly after disagreements with Rangel over their defense strategy, and the lawmaker insists he neither has the money to find new counsel nor the time to set up a legal defense fund. By walking out of the hearing, Rangel chose to leave the evidence in the case against him unchallenged.

"I truly believe I am not being treated fairly," Rangel said yesterday.

In a statement he released today in reaction to the subpanel's findings, Rangel called the verdict "unfortunate."

"How can anyone have confidence in the decision of the Ethics Subcommittee when I was deprived of due process rights, right to counsel and was not even in the room?" Rangel said. "I can only hope that the full Committee will treat me more fairly, and take into account my entire 40 years of service to the Congress before making any decisions on sanctions."

"Sitting in judgment of a fellow member a colleague is a very difficult task," Rep. Michael McCaul (R-Texas) said after the verdict was read. The eight-member panel, he said, acted in a "nonpartisan, professional manner, and dignified manner, which I hope will restore dignity to the House of Representatives."

The trial, he said, should help Congress "begin an era of transprency and accountability."

Rangel has been mired in ethics charges for some time. Earlier this year he gave up his powerful post as chairman of the Ways and Means Committee after coming under scrutiny for corporate-funded travel in a separate ethics case. The 80-year-old congressman from Harlem nevertheless managed to fend off a primary challenge and win re-election for a 21st term this month.

Along with Rangel's case, the ethics committee is slated to hold hearings in the coming weeks on charges against Democratic Rep. Maxine Waters of California, who is accused of improperly using her influence to help a local bank get federal bailout funds.