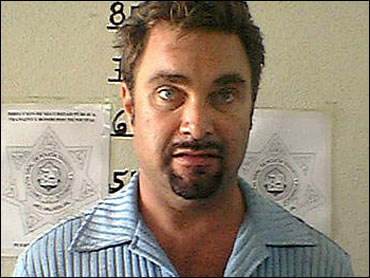 Convicted rapist Andrew Luster sought to justify his crimes and listed his victims and prosecutors under the word "PAYBACK" in a notebook left in Mexico following his capture, according to a published report.

"To want to take a good man's life and destroy his family ... was nothing short of ruthless and much more to the point of unforgivable," said an entry in the notebook, according to the Ventura County Star.

The 13 pages also listed topless bars in Puerto Vallarta, Mexico, the names of people Luster hoped would send him money, and notes on how to pick up women in Spanish, the newspaper reported Sunday.

Luster, 39, is the great-grandson of cosmetics magnate Max Factor. He jumped his $1 million bail and spent nearly six months on the run until he was captured by a bounty hunter Wednesday in the Mexican beach resort. He was returned to California to begin serving a 124-year prison sentence for drugging and raping three women at his home northwest of Los Angeles.

Reporters for the Star and other media outlets fished the notebook from a trash can in Luster's motel room and looked at it Saturday, motel manager Oscar Lopez said. Lopez told The Associated Press on Sunday that motel staff later threw the notebook out.

California authorities came to the motel Sunday looking for the notebook but were told it was gone, Lopez said.

The notebook listed names of those who prosecuted him, the women he raped, detectives and an investigator. All the names were under the heading "PAYBACK," which was underlined, the Star reported.

In several entries, Luster attempted to justify his actions and criticized authorities for prosecuting him.

"Yes they were in an extreme state of inebriation ... But this — as any actively sexual person (player) knows is not outside the grounds of ethical play," Luster wrote in one entry.

Editors at the Star said the paper's reporter had covered Luster's trial and recognized his handwriting.

Laura Bosley, an FBI spokeswoman in Los Angeles, declined to say whether the FBI knew of the notebook or was trying to obtain it. She said the bureau does not comment on ongoing investigations.

Luster's attorney Roger Diamond said he knew nothing about any notebook his client had, but said its contents would have no bearing on his efforts to reinstate Luster's appeal. The appeal had been dismissed June 10 on the grounds Luster had forfeited his right to appeal by jumping bail.