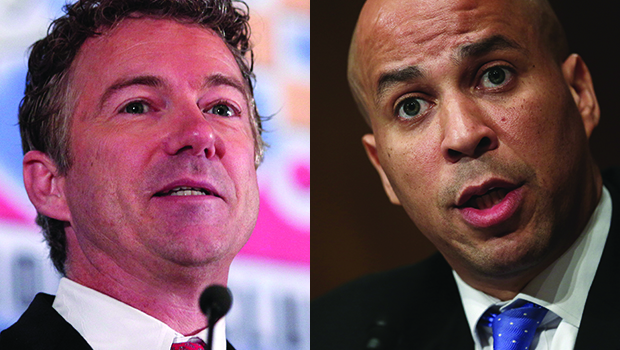 Two senators from the opposite ends of the political spectrum are aiming to find some common ground in 2014 over the issue of the so-called drug war.

After Paul wrote that Booker “doesn’t RT me enough,” the Democrat referenced another Festivus tradition, responding, “U, me & "feats of strength:" Senate floor, name the time.”

That prompted Paul to respond more seriously, “how about mandatory minimum sentencing reform instead?” Booker then suggested they “throw in reforming Fed Hemp & Marijuana laws.”

Paul has co-authored legislation to legalize industrial hemp, a variety of Cannabis with very low levels of THC, the psychoactive agent in the plant. The coming year, meanwhile, is set to be a significant one for marijuana policy -- on Jan. 1, the first state-licensed marijuana shops will open for business in Colorado. Voters in both Colorado and Washington state in 2012 approved ballot measures legalizing recreational marijuana use, even though the drug remains illegal at the federal level. The federal government has said that, for now, it will take a hands-off approach to the issue, though if state laws keep evolving, the imbalance between state and federal marijuana laws may reach a tipping point.
Booker capped off the exchange on Twitter by remarking, “Here is to a 2014 where we take on the failed war on drugs.”