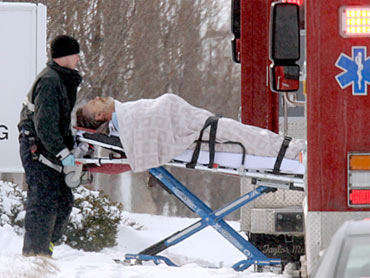 Police on Friday revealed details of the horror inside a plant where a shooting spree left four dead and five injured - bullet-sprayed walls, trembling workers and a suspect armed with four guns and a fannypack full of ammunition.

The head of homicide for St. Louis police said authorities still do not know why an employee of ABB Inc. opened fire at the plant, killing three co-workers and wounding five others before turning a gun on himself early Thursday.

"We don't have an answer to that at this time, why somebody would go to such great lengths to commit murder at the workplace," Police Capt. Michael Sack said.

Sack said Timothy Hendron, 51, had four guns during the rampage that sent 40 to 50 workers inside scurrying to the rooftop, broom closets and boiler rooms to seek safety. Police previously had said there were three guns. Sack said Hendron had an assault rifle, shotgun and two handguns.

A fifth gun was also found near a guard station outside the plant, but police are not sure to whom it belonged. There have been unconfirmed reports that one of the victims may have used his own weapon to try and stop Hendron. Sack said he didn't know if that was the case, but that it was being investigated.

The scene at the plant, inside and out, was chaotic, Sack said. SWAT teams went in and rescued workers, including some who were injured. More than 100 rounds of shots had been fired inside the building, Sack said.

Sack said Hendron had been scheduled to work on Thursday and he had arrived in normal work attire. Sack said his body was found in an office area, and that he was wearing a fannypack filled with hundreds of rounds of ammunition.

Sack said police aren't yet sure if Hendron targeted victims or shot those in his path. Police are looking at video surveillance from the plant to track the shooter's movements.

A woman who answered the phone Friday at the Hendron residence in suburban Webster Groves, Mo., said, "We have no comment."

Neighbor and friend Ronald Bartram said Hendron worked at ABB for more than 20 years, at one point as supervisor, before "they took that away from him."

"At one point they made him a buyer. They bounced him around."

Most recently, he was a line worker assembling transformers.

At least one of the victims, 57-year-old Carlton Carter of St. Louis, also worked the line. Another victim, Cory Wilson, 27, of Collinsville, Ill., was a supervisor. It wasn't clear what the third victim, Terry Mabry, 55, of Moscow Mills, Mo., was assigned to do at the plant.

Thomas Schmidt, a spokesman for ABB in Switzerland, declined to say whether Hendron had been demoted, saying he couldn't discuss information about Hendron or the other employees.

He said he wasn't certain when the plant would reopen.

The motive of the shooting isn't known. But in 2006, Hendron and other ABB workers sued the company over retirement losses. The federal lawsuit accused ABB and its pension-review committee of causing their 401(k) accounts to include investment options with "unreasonable and excessive" - and undisclosed - fees and expenses. The trial began Tuesday in Kansas City, Mo.

Many of Hendron's neighbors described him as an amicable family man. Yet even those who knew him casually were aware that Hendron was unhappy at work. He mentioned in passing that he was having problems at ABB, and over the last two years he asked his neighbor Mike Sweney, an attorney, for referral to a good labor lawyer.

"I sensed a certain disgruntlement on his part," Sweney said.

On four occasions in the 1990s, when Hendron was living in St. Louis, the city collector of revenue sued him for nonpayment of personal property tax on his vehicles. The department's Susan Ryan said Friday he eventually paid.

Two of the injured, Darrell Buckley, 51, and Stephen Sharp, 55, were hospitalized in critical condition. Two others, Keith Garner, 51, and John Green, 56, were in fair condition. Jerry Brown, 52, was treated and released from the hospital Thursday.