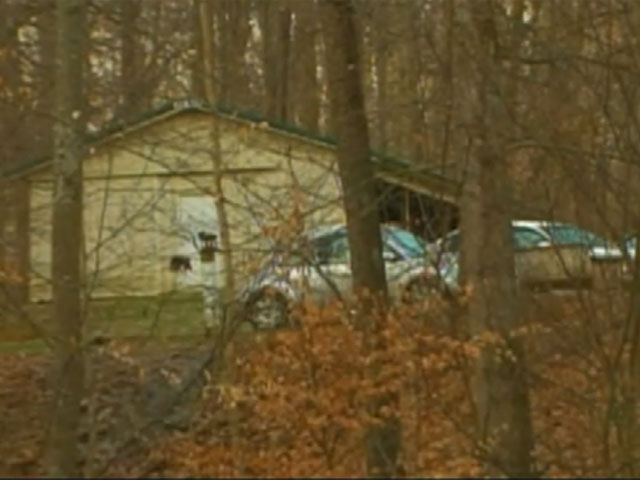 LOGAN, Ohio - A dispute over whether a terminally ill woman should have been given tea and toast or an orange apparently upset her husband so much that he shot and killed two of the woman's sisters and his own son before killing himself, a sheriff said Tuesday.

The sick woman, Darlene Gilkey, witnessed the shootings from a hospital bed in her living room but wasn't hurt, Hocking County Sheriff Lanny North said. The 59-year-old is dying of cancer, he said.

The woman's son, Ralph Sowers III, told a 911 dispatcher he survived because his stepfather, Paul Gilkey, said he was sparing him because he had kids.

After the shootings Monday, 63-year-old Paul Gilkey stepped out onto his front porch, sat down in a chair and shot himself to death, the sheriff said.

North said events leading to the shootings began earlier in the day when some of the victims had apparently served Darlene Gilkey tea and toast after Paul Gilkey had already peeled an orange for her.

That led to an argument that escalated over time and culminated in the shootings, the sheriff said.

"It was over her well-being, her care," the sheriff said.

A sobbing Sowers described in a nearly hour-long 911 call how Paul Gilkey shot his son, who was Sowers' brother.

"He tried to shoot my brother, and my brother was hiding behind me. And then he kept telling me to `Duck! Duck! Duck!"' Sowers said on the call.

Then Paul Gilkey "walked up to me and held the gun over my head and squeezed the trigger, and my brother went down on the ground," Sowers said. "And then he walked over to my aunt and shot her."

Sowers, 36, fled the house and drove up the road seeking a cellphone signal to call for help.

"He let me leave because I have kids," Sowers says on the 911 call.

After Gilkey shot himself, his body stayed upright and in the darkness police couldn't tell if he was alive, North said. That led to concerns about a hostage situation, although that wasn't the case.

Deputies who stormed the home around 9 p.m. found Paul Gilkey dead on the front porch and the three other bodies on the living room floor, North said.

The house sits at the end of a gravel lane amid rolling, wooded hills dotted with farmland near Logan, about 50 miles southeast of Columbus.

Paul Gilkey, who went by David, served a decade in prison beginning in 1974 for killing a man in Athens County in May of that year, according to court records. He had beat the man to death with a fence post, according to records obtained by CBS affiliate WBNS in Columbus, Ohio. He spent 10 years in prison.

WBNS reported that records also showed that Darlene Gilkey divorced Paul Gilkey twice first in 1975 and then in 1982, citing his jail time as a reason.

Darlene Gilkey was receiving hospice care through a company in nearby Lancaster, whose chief executive declined to comment Tuesday because of privacy restrictions.

A cousin of Paul Gilkey said Gilkey was upset about other family members being in the house.

"They - the two sisters and his son - were staying out there, and he said he couldn't spend any time with her," said Matthew Henderson, 45.

Henderson said his own wife happened to call the home immediately after the shooting and spoke with Darlene Gilkey, who said that her 63-year-old husband "shot everybody" and then went outside.

"I said, `What's he doing?' (She said) `I think he's waiting on more people to come so he could kill them,"' Henderson recounted.

The wife didn't say why she'd been spared, Henderson said. "I think he thought if he would kill her he would go to hell," he said.

Henderson said his cousin had recently bought two or three plots at a cemetery, though it didn't seem unusual for a man whose wife had terminal cancer. He described Paul Gilkey as unpredictable and unstable and said that he might have taken some pills and been drinking before the shooting.

Leroy Gilkey was a high school Spanish teacher in the Westerville school district in suburban Columbus.

Gilkey was "a very well loved and well respected teacher among students, among his colleagues and among the families that send their children to Westerville North (High School)," said Greg Viebranz, a spokesman for the school district. Principal Kurt Yancey added to the Columbia Dispatch that "every conversation he was in such great spirits."

The Columbia Dispatch reported that despite fighting with his father over his mother's power of attorney, he owned and visited the home that his mother was staying in after she was diagnosed with cancer a month ago.

Neighbors were shocked by the bloodshed. John Poling, who lives about a quarter-mile down the road, said he didn't know the couple but believed they had moved into their home within the past 10 years. He said he watched from a distance Monday night as law enforcement and SWAT officers closed in.

"This is normally a pretty quiet county," North said. "We have a few major crimes occasionally but nothing of this magnitude."