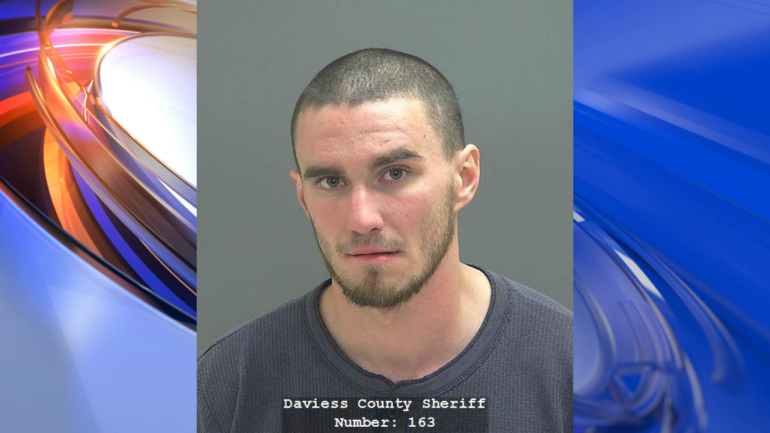 DAVIESS COUNTY, Ind. - Police in Indiana are searching for an inmate who escaped Monday night from a hospital where he was being treated after swallowing two pens, officials say.

Officials say Shane Michael Alan Cates, 23, escaped from the Daviess Community Hospital in Washington, Ind., at some point before 10:54 p.m., when the sheriff's department was notified.

Daviess County Sheriff Jerry Harbstreit told 48 Hours' Crimesider Tuesday that Cates broke through a window, and ran down a hallway where he broke another second floor window, allowing him to jump a short distance down to a roof. From there, he was likely able to climb down to a large air conditioning unit with a ladder attached to it.

Police K-9 units from two neighboring counties were called according to Harbstreit, and dogs tracked Cates' scent for several blocks, before his trail suddenly stopped.

"We really believe at that point a vehicle came and picked him up," Harbstreit said. "We've had a light snow. We can see the tracks, and it appears he walked over to a spot, and then there are no more tracks."

Cates was taken to the hospital from jail last week after swallowing two pens, Harbstreit said.

"Rather than the surgeons go in and take them out surgically, they were letting them flow through his system," Harbstreit said.

The sheriff said it's not clear if the pens were swallowed as part of a larger scheme to break free.

"We don't know that, without picking his mind. We don't know if he had planned that or if he planned all this afterwards," Harbstreit said. "He had not really been a problem so far as that goes, up to that point."

Detectives with the sheriff's office -- which has 19 officers, including the sheriff -- are interviewing corrections officers who oversaw Cates' stay at the hospital, as well as anyone who visited him while he was in jail, Harbstreit said. They are also reviewing video from the jail and hospital, and checking addresses associated with Cates and his relatives.

Cates, of Washington, Ind., was taken into custody on Dec. 22. He was being held for allegedly violating probation.

Cates also faces two felony charges of assault and aggravated battery stemming from a Dec. 10 incident in which he's accused of hitting his wife and mother, according to court records obtained by 48 Hours' Crimesider.

Officers were called to Cates' home, where they found a woman identified as Cates' wife "bleeding from multiple locations, including her nose, and under her left eye, along with scrapes to her left forearm," according to the records.

The victim told police that Cates pulled her hair and punched her in the face. When Cates' mother attempted to intervene, Cates allegedly pushed her across the room, before striking her multiple times, police wrote.

A 12-year-old child allegedly witnessed the incident, according to police.

Cates' alleged probation violation was related to a 2013 drug conviction.

Cates is about five feet eight inches tall, weighs 160 pounds, and has brown hair and hazel eyes, according to police. Anyone with information on Cates' whereabouts is asked to call the Daviess County Sheriff's Office at (812) 254-1060.