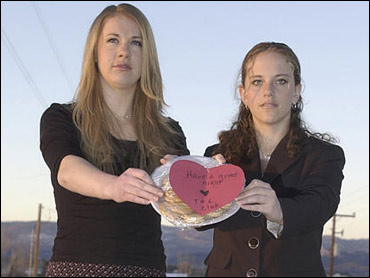 Two teenage girls who surprised their neighbors with homemade cookies late one night were ordered to pay nearly $900 in medical bills for a woman who says she was so startled that she had to go to the hospital.

Taylor Ostergaard, 17, and Lindsey Jo Zellitti, 18, baked the chocolate chip and sugar cookies one night last July. They made packages with a half-dozen cookies each and added large red or pink construction-paper hearts that carried the message, "Have a great night" and were signed with their first initials: "Love, The T and L Club." Then they set off to make their deliveries.

Wanita Renea Young, 49, said she was at her rural home south of Durango around 10:30 p.m. when she said saw "shadowy figures" outside the house banging repeatedly on her door. She yelled, "Who's there?" but no one answered, and the figures ran away.

Frightened, she spent the night at her sister's home, then went to the hospital the next morning because she was still shaking and had an upset stomach.

The teenagers' families offered to pay Young's medical bills, but she declined and sued, saying their apologies were not sincere and were not offered in person.

The girls declined comment after the ruling. Taylor's mother said the girl "cried and cried."

"She felt she was being punished for doing something nice," Jill Ostergaard said.

"The victory wasn't sweet," Young said. "I'm not gloating about it. I just hope the girls learned a lesson."

The teens said they did not answer when the woman called out because they wanted the treats to be a surprise.