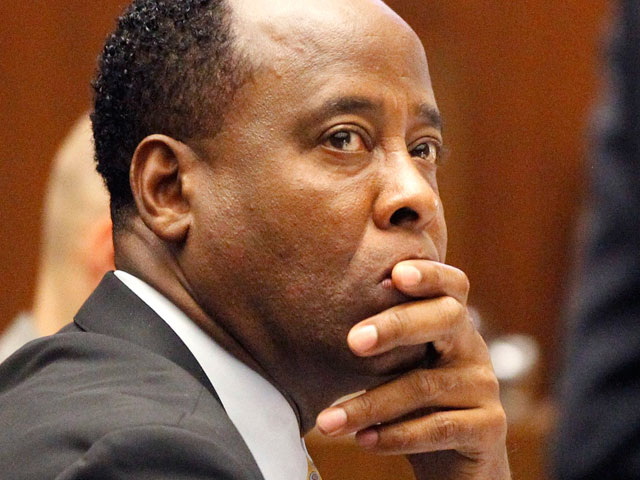 (CBS/AP) LOS ANGELES - Michael Jackson's doctor seemed surprised to learn during a police interview two days after the pop superstar's death that three bags of medical items had not yet been recovered from Jackson's bedroom, a police detective told jurors Tuesday.

Jurors in the involuntary manslaughter trial of Dr. Conrad Murray Tuesday finished hearing a recording of the physician's police interview two days after the singer's death

The recording of Murray's interview ended shortly after the physician explained that the medical items could be found in a closet.

Another portion of the session focused on Murray's account of how he told the singer's mother and children about the singer's death.

"After they cried and cried and cried, then his daughter uttered a lot of words of unhappiness," Murray told detectives, saying Paris Jackson was afraid of being alone after her father's death.

"`I know you tried your best, but I'm really sad,'" he continued, recounting her words. "`I will wake up in the morning, and I won't be able to see my daddy.'"

The interview helped transform the investigation into Jackson's June 2009 death from a simple death inquiry into a homicide case.

Murray told the detectives he always put the medications and equipment he used on Jackson away "because he wanted me not to have anything hanging around."

Detective Scott Smith then asked, "Where's your bag where those syringes would be now?"

"I don't have them," Murray replied, before telling the detectives where to find the bags.

Smith testified that Murray had a startled expression when he learned detectives hadn't yet recovered the bags.

Smith said he and his partner sat down with Murray and his attorney without knowing much about Jackson's death.

"At this time, we didn't have any answers," Smith said. "It definitely wasn't an interrogation."

Authorities contend Murray gave Jackson a lethal dose of the anesthetic propofol and other sedatives while trying to help the singer sleep. Murray's attorneys say Jackson gave himself the fatal dose when the doctor left the room. Murray has pleaded not guilty to involuntary manslaughter.

The interview amounts to Murray's version of events in Jackson's bedroom in the days and hours before the singer's unexpected death.

The cardiologist told police that he had only left Jackson alone for a couple of minutes to use the restroom before returning to find the entertainer unresponsive. But phone records presented during the trial, now entering its third week, show that Murray made multiple phone calls before realizing Jackson had stopped breathing - including a 32-minute call to one of his medical clinics and another call to a girlfriend.

Murray made no mention of the calls during his police interview.

Earlier in the recording, the cardiologist tells police that he held hands with Jackson's mother Katherine and his sister LaToya at the hospital where the singer was pronounced dead June 25, 2009.

"I cared about him," Murray told the detectives at one point about Jackson. "I tried to help him."

Murray told the detectives he thought the singer was becoming addicted to propofol after nightly treatments by Murray for roughly two months. He said he was trying to wean him off when things went wrong.

Prosecutors are expected to call a leading expert on propofol to explain the drug's effects and dangers to the panel.

The prosecution case appears to be in its final stages, with coroner's officials, experts and police detectives among the remaining witnesses.

If convicted, Murray could face up to four years behind bars and the loss of his medical license.