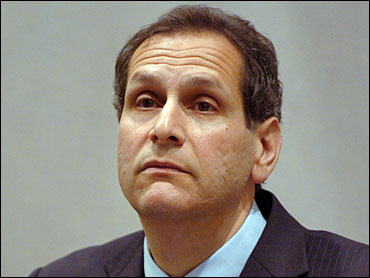 Schlesinger earlier this month acknowledged that he used a fake name -- Alan Gold -- during the same decade when he gambled at the Foxwoods Resort Casino.

"I have never done anything illegal," Schlesinger told the Courant. "I did absolutely nothing wrong. I'm not getting out of this race because of the fact I had a couple of civil lawsuits filed against me 15 years ago."

Boardwalk Regency Corp., owner of Caesar's Palace, filed a lawsuit against Schlesinger on June 12, 1989, claiming he owed $8,800. Schlesinger settled the case on May 21, 1990, by paying Caesar's $10,211, including interest, according to New Jersey court records obtained by the newspaper.

Schlesinger, 48, has described himself as a recreational blackjack player.

He said his decision to use a fake name at Foxwoods had nothing to do with any debts he had in Atlantic City.

"Those losses could have occurred over a long period of time, and you have to remember, at the same time I was losing at those casinos I could have been winning at a different one," Schlesinger said. "I may have been having cash flow problems at that time and it took a while to pay back the markers."

Schlesinger, a lawyer, former state lawmaker and ex-mayor of Derby, is running as the Republican candidate for the seat now held by U.S. Sen. Joseph Lieberman.

After his gambling became an issue this month, Republican Gov. M. Jodi Rell urged him to drop out of the Senate race, but Schlesinger called it a "non-issue." A Rell spokesman said the governor had no comment on the New Jersey gambling debts.

The telephone survey of 2,502 registered voters, was conducted July 13-18. The survey error margin was about 2 percentage points.