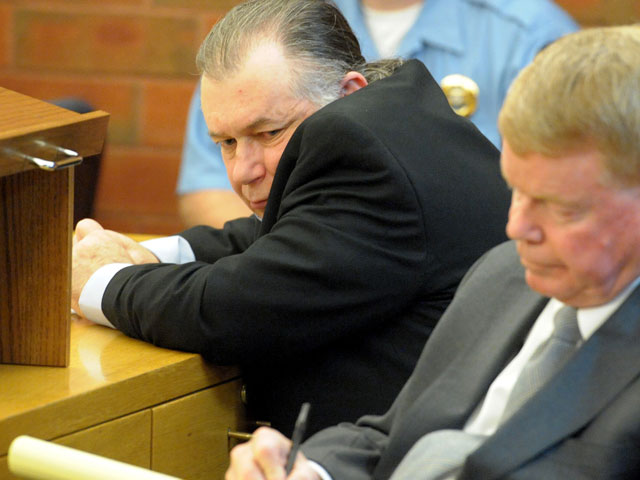 HARTFORD, Conn. - A prominent former advertising executive was sentenced Wednesday to 70 years in prison for kidnapping his ex-wife, holding her hostage for hours and burning down the Connecticut home they once shared.

Richard Shenkman, 62, was sentenced in Hartford Superior Court after a jury convicted him in October of 10 charges including kidnapping, arson, assault and threatening. He faced a potential of nearly 80 years in prison.

Shenkman and his ex-wife, Nancy Tyler, were in the middle of divorce-related court hearings when he abducted her from her office's parking garage in downtown Hartford on July 7, 2009, and forced her at gunpoint to drive about nine miles to the home in South Windsor.

Authorities said Shenkman and Tyler were due in court for a divorce-related hearing later that morning, and he was supposed to turn over the house to her or face jail time for contempt of court.

Tyler testified that Shenkman threatened to kill her, fired a gun near her head and threatened to blow up the house. She escaped unharmed, and he was arrested after running out of the burning house.

During Wednesday's sentencing hearing, Shenkman told Judge Julia Dewey that he has hired an assassin to kill Tyler. The judge had rejected a motion by Shenkman's attorney to delay sentencing for further psychological evaluation of his client.

"Nancy's assassin is experienced and he has killed in the past," Shenkman said. "Ending Nancy's life when I am in prison makes my sentence worthwhile."

Defense attorney Hugh Keefe said Shenkman's remarks show his client is mentally ill. He had said Shenkman is a danger to himself and others and has gotten worse since his conviction. Keefe said he will appeal the judge's decision.

Tyler had urged the judge to impose the maximum prison sentence, saying Shenkman has terrorized her, her family and her friends. She begged the judge to "give us some peace."

"Mr. Shenkman's campaign of destruction has been devastating," Tyler said. She said he continues to threaten her from jail.

Prosecutor Vicki Melchiorre said Shenkman told prison guards that Tyler wouldn't make it to sentencing and he would be on death row for murder for hire.

"He will never stop trying to destroy her," Melchiorre said in asking for the maximum prison sentence.

Shenkman had mounted an insanity defense, but Tyler testified that her ex-husband often acted "crazy" to get his way.

Tyler testified at the trial about her harrowing ordeal, saying Shenkman handcuffed himself to her, fired a handgun twice near her head, prepared a noose for her and claimed to have rigged the house with explosives as swarms of police surrounded the home. Tyler had called a friend on her cellphone in concern over seeing Shenkman's minivan near her office and urged her to call police just before she was kidnapped.

Tyler said Shenkman handcuffed her to an eyebolt in a basement wall at one point, and that she managed to unscrew the bolt and run outside when Shenkman went upstairs to check on police activity.

Shenkman talked on the phone to dispatchers and police officers several times during the ordeal. The jury listened to the recorded conversations, in which Shenkman sometimes sounded frantic, screamed, used profanity and several times counted down the seconds to his threatened killing of Tyler.

Tyler described how Shenkman became increasingly enraged at police during the ordeal for not meeting his demands, which included having a priest administer Tyler last rites and having authorities fax over a marriage license so he and Tyler could get remarried.

Police testified that the nearly 15-hour standoff ended when Shenkman came out of the burning home, which was uninsured at the time, and pointed a handgun at his own head. Minutes later, officers shot Shenkman with rubber bullets and used a stun gun on him twice before subduing him and taking him into custody.

Shenkman and Tyler married in 1993, and she filed for divorce in 2006. A judge approved the divorce in 2008, but court proceedings continued as Shenkman appealed.

He also is charged with burning down his and Tyler's beachfront home in East Lyme in 2007 just before he was to hand it over to Tyler as part of their divorce. He awaits trial on those charges.