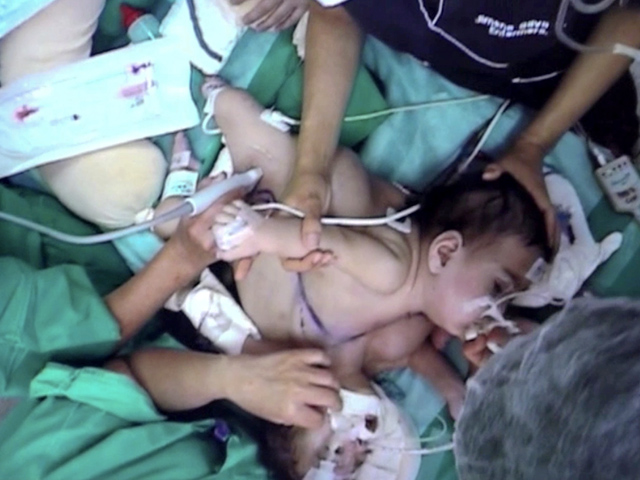 The procedure was widely followed in the South American country on television and on the Internet. Parents Jessica Navarrete and Roberto Paredes kept an anxious vigil at the hospital in Santiago as doctors separated the twins at the thorax, stomach and pelvis. It was the seventh and most complex operation yet for the twins, who lost a lot of blood in the process.

"We had a number of difficulties during the surgery, there were some surprises, but we were able to fix, solve the problems," Ossandon said at a news conference. "Both were successfully separated."

The twins came out of the surgery in "good condition," Ossandon added. But he didn't rule out future complications involving the effects from anesthesia and possible infections.

Because they were born sharing many of the same internal organs - and even a urinary system - the Chilean twins presented a particularly difficult challenge to doctors. About 100 people participated in the procedure, including 25 surgeons and anesthesiologists.

Navarrete said she was waiting for "a miracle from God" when the high-risk operation began Tuesday morning. But providing some comfort to the parents was the hospital's history with conjoined twins. Staff there have separated three sets before, although a fourth set died during surgery due to cardiac complications.

One out of every 200,000 live births worldwide results in conjoined twins, according to the University of Maryland Medical Center. About 35 percent survive only one day, while the overall survival rate is 5 percent to 25 percent.

Maria Paz and Maria Jose were born in the Villarrica hospital about 470 miles (760 kilometers) from Santiago and were kept under constant medical care, surviving with the aid of an artificial respirator.

Earlier this year, doctors separated the twins' legs, urinary tracts, pulmonary systems and other parts of their bodies.

Click below to see the girls and other amazing pictures of conjoined twins: