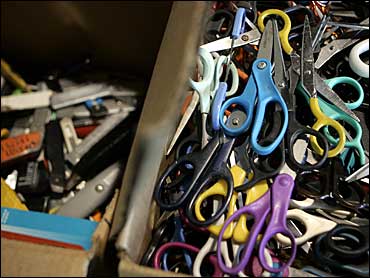 A man-sized artificial palm tree and a sausage grinder have shared space in a state government warehouse with piles of Swiss Army knives and chain saws — just a few of the things travelers have had to give up at airport security checkpoints.

Pennsylvania turns a small profit by disposing of these castoff items, which it accepts from security contractors at 12 airports in five states, by selling them to the highest bidders at the online auction site eBay.

And what about the abundance of liquids and gels discarded since the alleged British terror plot caused U.S. airports to prohibit them? Edward Myslewicz, a spokesman for the General Services Department told the Seattle Times that state officials are considering selling some of those items too.

Phoenix Sky Harbor International Airport has perhaps the most charitable approach. Airport spokeswoman Lexie Van Haren told the Seattle Times it plans to give 11 boxes of surrendered items to the city's human-services department, which will distribute items to homeless shelters.

Airport officials are still finding their way with these new items. Up to now, most of the contraband merchandise has been knives, nail clippers and cuticle scissors that were forbidden as carry-on items following the terror attacks of Sept. 11, 2001.

There's even a box full of blenders.

"There must be folks who like to mix up their own pina coladas when they get to Puerto Vallarta," said Ken Hess, head of the Pennsylvania General Services Department's surplus property program.

The program has brought in more than $307,000 since it began in June 2004, and overhead is low. Students from a truck-driving school pick up the merchandise, and it's sorted by state workers who can't do their normal duties because of injury or other reasons.

Ninety-eight percent of it will sell. Knives, auctioned by the lot, sell fastest. Ten pounds of assorted pocket knives, for example, recently attracted nine bids and sold for $42.

Some of the 2½ tons of miscellany that arrives every month consists of weapons, potential weapons and squirt guns.

However, the warehouse's current inventory also includes two sombreros, a plaque from a fishing contest in Cayuga Lake, N.Y., a jungle machete and about 100 sets of handcuffs, some fur-lined. At one point, the state had a sausage grinder, a man-sized artificial palm tree and a Christmas ornament decorated with the logo of hot dog purveyor Nathan's Famous.

There are all sorts of auto parts, kitchen implements, gardening tools, jewelry, sporting goods and batteries.

On one wall, sorters have set aside a few stranger items, including a single deer antler.

The Transportation Security Administration said 10 million prohibited items have been seized or voluntarily turned over this year nationwide.

"There are thousands of stories out there on why people either forget or just don't know the rules," said TSA spokesman Darrin Kayser.

Federal law gives states the right to get banned or discarded items from the TSA contractor responsible for removing them. Pennsylvania has agreed to accept items from airports in Philadelphia, Harrisburg, Johnstown and Allentown; Kennedy, LaGuardia and two other airports in New York; Newark and Trenton in New Jersey; Nantucket in Massachusetts, and Cleveland.

Pennsylvania has modified its program to maximize profitability. Smaller lots bring in more cash, so it no longer offers bulk sales like the 500 small Swiss Army knives that went for a record $595.

It also tries to package items together as a marketing hook. Hockey sticks, pucks and a goalie's mask were bundled for sale around the time of the Stanley Cup playoffs; gardening tools are sold in the spring; exercise weights are auctioned in early January to capitalize on New Year's resolutions; and baseball bats are put up for bid just before the World Series.

Hess said a hunting-season kit that included a buck knife, rope, flashlight and an all-purpose Leatherman tool sold "like hot cakes" before the start of deer season.

Kentucky, one of at least three other states that sells airport surplus on eBay, brings in $3,000 a month and stocks state agencies with surrendered hand tools and other equipment.