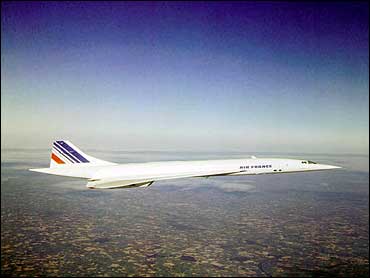 Playboys and potentates accustomed to arriving in New York before they left Paris will soon have to settle for ordinary, subsonic travel.

Air France is retiring its fleet of Concordes after this week, and British Airways will follow suit in October, ending for the foreseeable future the era of Champagne and caviar at Mach 2.

Unless Virgin Atlantic chief Richard Branson succeeds in his bid to take over British Airways' Concordes — which few consider likely — the 12 existing Concordes will be dispersed to museums.

"We want to let the Concorde retire in grace and dignity," said British Airways spokesman John Lampl. "It's just costing us more to run, and from a business point of view the decision was made to end Concorde now."

The idea of a supersonic passenger plane gained momentum in the 1950s, after Chuck Yeager's 1947 blast through the sound barrier. Manufacturers in Britain, France, the Soviet Union and the United States all worked on designs.

In 1968, the Concorde's first prototype rolled out at Toulouse, France. It lifted off 13 months later, three months after the Soviet version made its first flight.

The Concorde began regular service in 1976. With a cruising speed of 1,350 mph, it crosses the Atlantic in about three hours; because of the time change, westbound passengers arrive an hour before they left.

The Concorde's imminent demise is cause for mourning on Web sites where passengers post breathless accounts of their flights on the famed "silver bird."

But others will celebrate the last days of the needle-nosed jet, which is louder and less fuel efficient than any other plane currently flying.

An unrestricted one-way ticket on the Concorde costs $6,000, but special deals including half-Concorde round trips can make supersonic travel more affordable.

Growing up, Eric Seiden thought the Concorde "was just something cool" but assumed it was out of his reach. Then in 1994, Seiden, who lives in Miami and works for a distributor of screws, nuts and bolts, was unexpectedly upgraded from business class to Concorde on Air France.

"It's as close as you can get to outer space," said Seiden, who has his own Concorde Web site. "You can actually see the huge curvature of the Earth."

Seiden's fellow passengers included newlyweds Michael Jackson and Lisa Marie Presley canoodling in the back of the plane.

The marriage did not appear to be a publicity stunt, Seiden noted. "They were really in love."

Although the Concorde's regular passengers include many celebrities, the majority are time-is-money businessmen. And most are men: According to British Airways, 80 percent of its Concorde passengers are male, and the average age is 43.

At 19, Fraser Davidson drew stares when he flew the Concorde last September. Davidson, a student at the University of Southampton in England, received a Concorde ticket as a high school graduation gift from his father.

"The actual physical space is quite cramped," he said. "There's barely enough room for a tall person to stand."

Frisbie said he noticed Sarah Ferguson, the Duchess of York, on his outbound flight; no one bothered her.

Both Air France and British Airways suspended service on the Concorde after a July 25, 2000 Air France crash that killed 113. The planes were revamped to address safety concerns, and service resumed in November 2001.

But with the economy faltering, the luxury jet has been taking off less than half full.

The Concorde has always had detractors as well as fans. It is not bound by regulations requiring modern jets to muffle their engines, so even though the sonic boom occurs over water, the Concorde is louder than anything else that flies.

"It's a noisy, gas-guzzling piece of equipment," said Peter Wakeham, director of the Noise Abatement Society in Brighton, England. "We are happy to see it go."

"It is literally loud enough that last summer we had an incident when it made car alarms go off," Weiner said.