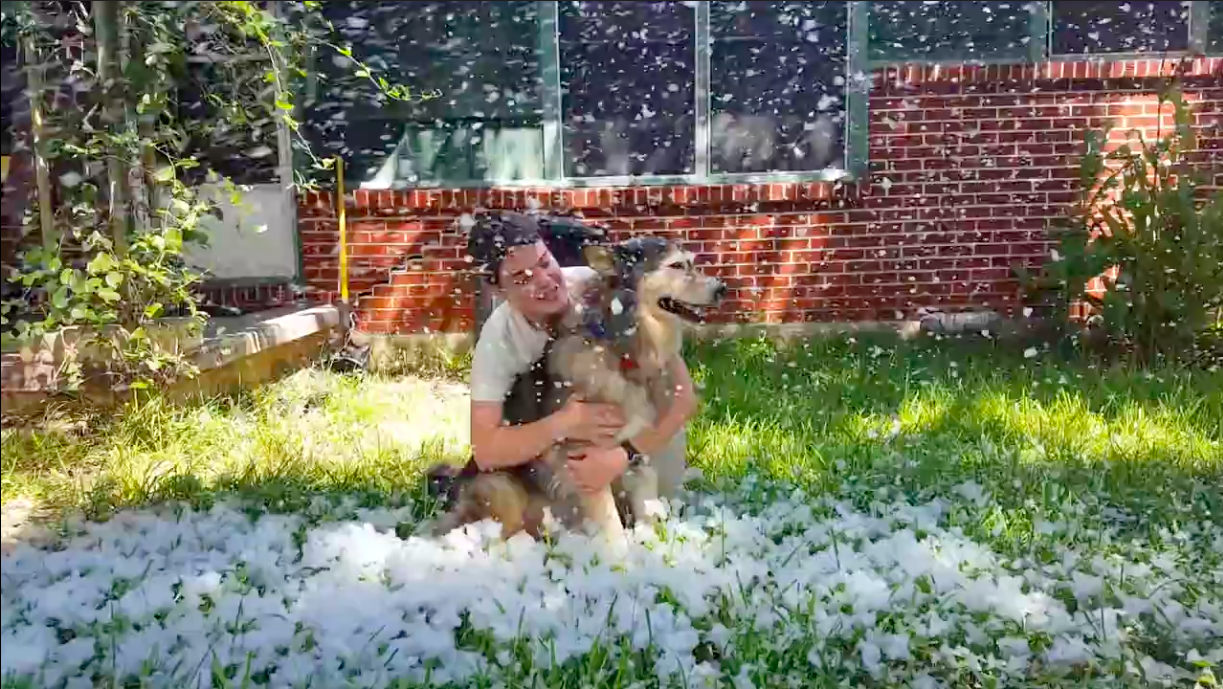 When you think of huskies, you probably picture cold weather… dog sledding… and romping in snow drifts, right? That’s why, for one husky owner, it meant the world to be able to give her beloved pet, Spunky, the experience of snow one last time.

Ashley Niels first met Spunky in 2004, when she was 19 years old and still in college. In her free time, Niels volunteered at an animal shelter in northern Wisconsin. One day, they asked her to pitch in by swinging by the pound and selecting a dog to bring to an adoption event.

“At first I wasn’t sure if I wanted to take him because he was a very energetic pup, bouncing all over the place and covered in mud,” Niels recalls of her first interaction with Spunky.

She did end up taking him, though. And by the end of the event, Niels had filled out the paperwork to adopt the rambunctious husky pup herself.

Ashley and Spunky moved into animal friendly off-campus housing and lived in Wisconsin together for four years until Ashley graduated.

“He LOVED snow,” Niels told CBS News. “He could play in snow drifts for hours and be just fine. He also liked eating it. He would come in with ice crystals all over him, but be so happy about it!”

After graduation, the pair moved to Tennessee and then to Austin, Texas. Niels describes the dog as her “bodhisattva,” her teacher.

“He has a special, ‘old soul’ quality about him,” she explains. “You don’t have to know Spunky long at all to feel it. It’s a presence. Wise and loving. Calming. He radiates a gentle knowing that just lets you know that everything is going to be all right and the world is good.”

All was well with the world, that is, until last Thursday.

“Spunky didn’t eat his breakfast that morning,” Niels explains. “He always inhales his food, so I knew something was off.”

Something was. A trip to Spunky’s vet revealed that his red blood cell count was critically low. Ashley hoped it was just a bad infection, but it turned out to be hemangiosarcoma – an invasive form of cancer. A specialist discovered nodules all over his liver and spleen. Spunky was bleeding internally and, unfortunately, neither surgery nor chemotherapy could help.

“At that point, I collapsed to the ground and didn’t actually hear anything else she said,” Niels recalled. “After setting up an appointment to have my vet come to my house Friday evening, I decided I wanted to do everything I could with him. My sister and girlfriend came over and we took him to one of his favorite parks. Then we got puppy cups from Dairy Queen for him to eat.”

Niels also posted a photo to social media that set something pretty amazing into motion.

“The day of the diagnosis, I suddenly remembered that I had promised him I would take him to see snow again. It had been a few years since the promise, but it had never worked out. Now, facing breaking that promise to him, I panicked. I posted a photo of him [online], writing, “Help! I need snow! I promised him he’d see snow again! Where can I get some?”

Her pet-loving community took it from there.

A friend from the local Austin shelter found a company that rented snow machines. She then started a GoFundMe campaign to raise funds to rent one. By the morning, enough volunteers had chipped in that the community was able to set Spunky up with a pizza party and – most importantly – snow.

“It may not have been real snow,” Niels told CBS News, “but there was so much love and devotion behind what they did for me and for him. It’s pretty incredible. I can’t even fully express how much it meant to me that all these people rallied around us.”

Niels believes Spunky felt that love too, and that gives her some comfort during this truly difficult time.

“He’s my everything,” Niels explains. “He’s been with me as I grew from a child to an adult. I’ve grown and changed, had good times and bad times. But he is always there. He is my constant. I learn so much from him. I still am, through all of this. Unconditional love. It’s the most powerful force there is and he’s given it to me all along. He’s my soulmate in furry clothes. Ashley and Spunky. We’re one and the same. I honestly don’t know what I’ll do without him.”

One thing she can do is watch the video of Spunky sitting in the snow in the middle of Texas, and take solace knowing that this incredible act of kindness and joy was inspired by her incredible dog.