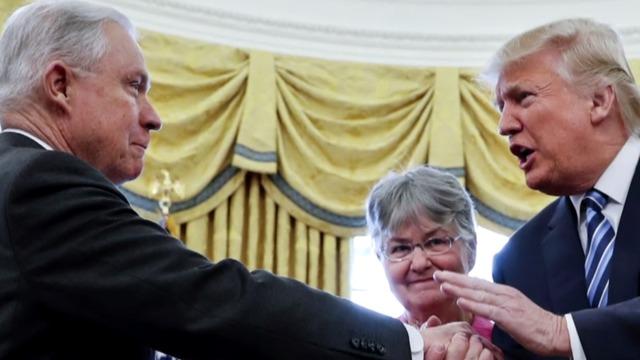 Why in the world would Donald Trump fire his attorney general, Jeff Sessions? Sessions is Trump's most effective "secret" weapon.

Yes, I've seen the stories: Trump yells at the TV every time that photo appears of Sessions and Deputy Attorney General Rod Rosenstein out on the town. But Trump yells about a lot of things: "Taking guns from people," making deals on DACA, leaving NAFTA and most of the time (tariffs being the apparent exception) nothing comes of it.

Former New Jersey Governor Chris Christie gave the "Fire Sessions" movement a push over the weekend: "If the president has absolutely no confidence in the attorney general, then the president has to act -- not just criticize, but act, and he has the right to do that," Christie said on ABC News' "This week with George Stephanopoulos." Then again, Christie was also a contender for Sessions' job, and he's still looking for his next gig, so his objectivity is questionable.

What is beyond question, however, is that Jeff Sessions has been one of the few members of the Trump team to deliver on his agenda. While the #MAGA crowd is tweeting out attacks over Session's refusal to personally drive to Hillary Clinton's house and handcuff her, Session's has steadily pushed pro-Trump policies forward.

"Attorney General Sessions is doing a far better job than anyone who would replace him," says J. Christian Adams, a former DOJ attorney and president of the conservative Public Interest Legal Foundation. "On voting law and shutting down the craziest excesses of Holder, he gets an A+."

While the Department of Homeland Security (DHS) and its Immigration and Customs Enforcement (ICE) division lead the way on border security and enforcing immigration law, the attorney general and the resources of the Justice Department can play a big role, particularly on the political side. Consider the current controversy over Oakland Mayor Libby Schaaf's advance warning to local illegal immigrants of an ICE enforcement action. According to ICE's acting director Thomas Homan, the Department of Justice is reviewing the possibility that Mayor Schaaf broke the law and, therefore, could face federal prosecution. That's Jeff Sessions' Justice Department.

While the Trump administration's immigration policies, like denying federal grant money to so-called "sanctuary cities," have hit some roadblocks in court, Sessions has pressed ahead aggressively, threatening to use his subpoena power to force "sanctuary cities" to demonstrate whether or not they are sharing information with federal law enforcement as required by law; keeping more illegal immigrants awaiting hearings in detention; and using the "Institutional Hearing Program" to send illegal immigrants convicted of crimes straight from prison to deportation.

This is all in addition to his most politically significant act -- declaring that President Obama's "pen and a phone" approach to the Deferred Action for Children Arrivals (DACA) was illegal and, therefore, he would not defend it in court—which led to the current DACA controversy.

Over the summer when President Trump was decrying Jeff Sessions' decision to recuse himself from #RussiaGate, his attorney general was announcing the return of civil forfeiture -- a policy that allows law enforcement to seize the money and property of private citizens suspected, but not convicted, of a crime.  Civil libertarians, including many on the Right, oppose this policy. But who loves it? Donald Trump.

"So asset forfeiture, we're gonna go back on. I mean how simple can anything be. You all agree with that I think? I mean do you even understand the other side on that?" Mr. Trump said at a White House round table event last year with representatives of local law enforcement.

And while President Trump has sent mixed signals on legalizing marijuana, Sessions has made law-and-order Republicans happy by unleashing his department to enforce federal anti-pot laws, even in states like Colorado and Massachusetts, where recreational weed is legal. Ending the Obama-era policy discouraging prosecutions "reflects Congress's determination that marijuana is a dangerous drug and that marijuana activity is a serious crime," Sessions said in January.  This reflects Mr. Trump's overall "get tough" approach on drugs, including the possibility of DOJ lawsuits against opioid manufacturers and his recent suggestion that drug dealers should face the death penalty.

Jeff Sessions is actually benefitting from the Russiagate story or, more accurately, from Trump's attacks on Sessions' handling the issues surrounding the probe into Russian meddling in the 2016 presidential campaign. The more the president calls him "weak" and "disgraceful," the more favorable Sessions appears to the anti-Trump media. Sessions, a diehard conservative, is never going to be a media darling, but being under fire from Trump gives him some cover with the press. This, perhaps, explains why he's been able to take some aggressive actions with relatively little press coverage.

In addition, having recused himself from the special counsel process (which Trump hated) and offered his resignation to Trump once already over this issue (Trump declined it), Sessions is essentially free to focus on pro-Trump policy instead of anti-Trump politics—all with Deputy Attorney General Rod Rosenstein acting as his "Get Out Of The Trump Doghouse Free" card.

"MAGA people calling for Sessions' removal must not know that Rod Rosenstein would become the acting AG for the many months it would take to confirm any replacement," Adams says. And whatever people don't like about Sessions, his Senate-confirmed replacement will be worse because the Senate changed since Sessions was confirmed."

Sen. Lindsey Graham agrees. He thinks Sessions "is doing a fine job," and adds, "But, if you want to blow up the Senate, try to find an attorney general to replace Jeff Sessions under these circumstances."

As a result, Sessions is essentially free to push for some of most extreme Trump-friendly policies and still count on pressure from Donald Trump's enemies to keep him in the job.

And Trump  fire him? As the saying goes, he may be dumb, but he's not stupid.