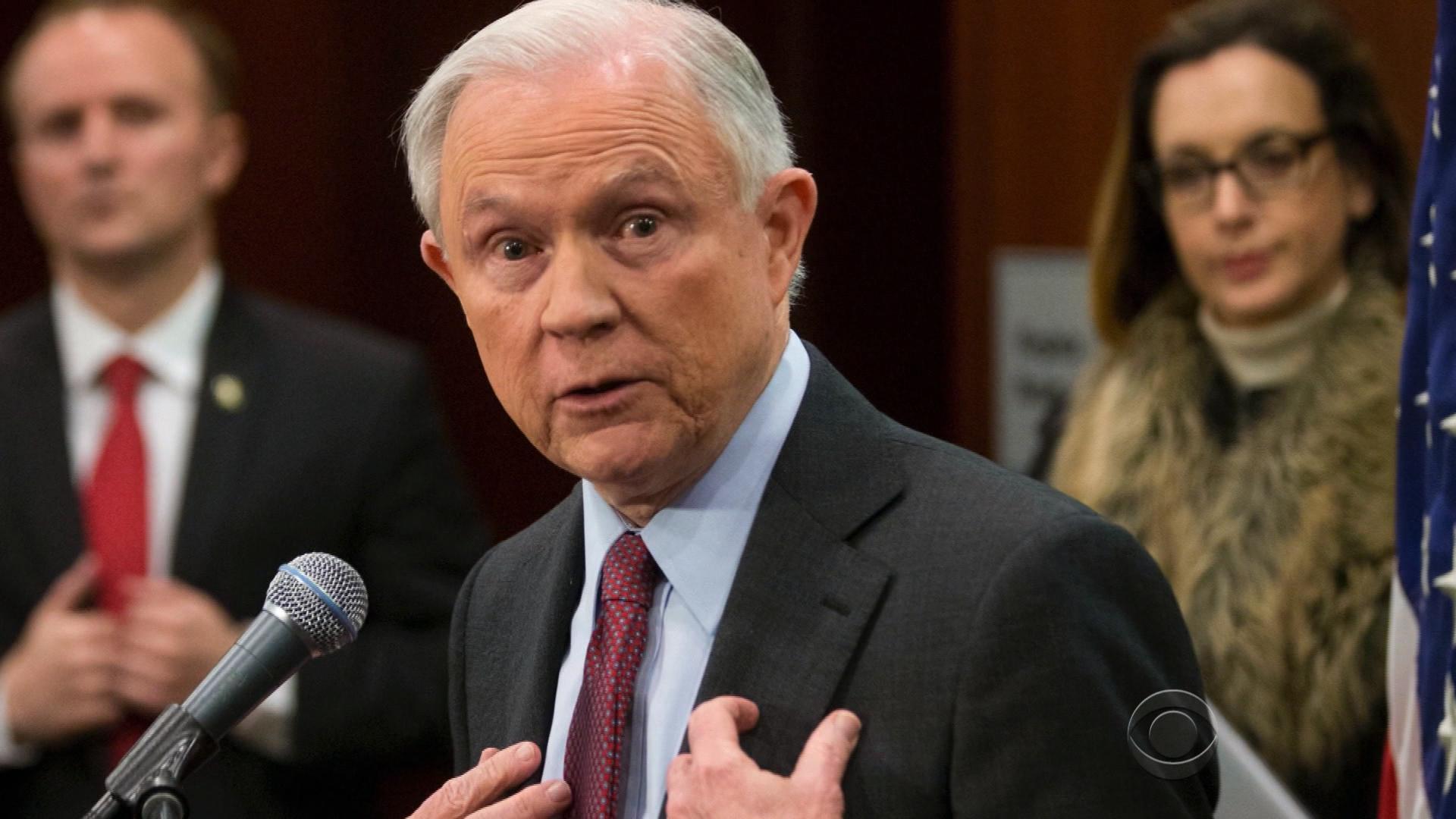 The Justice Department announced their plans to reinstate the use of asset forfeiture, especially for drug suspects -- making it easier for local law enforcement to seize cash and property from crime suspects and reap the proceeds.

The practice has been criticized because it allows law enforcement to take possessions -- such as cars and money -- without indictments or evidence a crime has been committed.

Sessions said these seizures help weaken criminal organizations by taking away their funding, returning property back to victims of crime, as well as give funds back to law enforcement officials by allocating the assets toward new vehicles, vests and police training.

CBS News' Paula Reid reports that 24 states have passed laws limiting the practice, but local law enforcement can get around those restrictions by giving seized assets to the federal government instead of returning them to their owners. This practice is called "adoption" and it's been used to seize almost $1 billion in assets over the last decade.

In an off-camera briefing on Wednesday with reporters, Deputy Attorney General Rod Rosenstein defended the forfeiture practice as a way to empower law enforcement. This new policy allows local police to seize property even from people not charged with a crime. About 20 states have reformed the practice and said that assets can only be seized with an indictment or conviction.

Reid reports that when asked why the DOJ would override the will of over 20 states that do not want their citizens subject to this, Rosenstein repeatedly claimed that this practice will help solve the opioid crisis.

A change would likely represent another reversal by Sessions of Obama-era Justice Department policies. His Democratic predecessor Eric Holder had tightened control of the department's asset forfeiture operations amid concerns that property could be seized without judicial oversight and without the owner ever being charged with a crime.

Holder namely restricted the ability of the federal government to take possession of, or adopt, assets seized by local authorities, who could then share in the proceeds with their federal counterparts. Civil liberties groups and some members of Congress praised the move as a step toward reform because that practice made it easier for local authorities to circumvent state laws that were sometimes stricter than the federal ones governing seizures.

Sessions acknowledged criticism of the policy on Wednesday, saying that as the DOJ encourages civil forfeiture whenever appropriate, "we must protect the rights of law abiding people whose property is used without their consent."

He noted that the federal government will not adopt seized property unless the state involved provides information demonstrating that the seizure was justified form the beginning with probable cause.

Sessions added that there will be enhanced training on asset forfeiture laws, noting that the depart will adopt smaller seizures of cash only if there exists some level of criminality.

President Donald Trump himself was in favor of asset forfeiture, discussing the topic with sheriff's around the country back in February.

"So asset forfeiture, we're gonna go back on. I mean how simple can anything be. You all agree with that I think? I mean do you even understand the other side on that?" Mr. Trump said at White House round table event.

As Mr. Trump questioned members of the round table if legislation or an executive order would be needed "to put that back in business" a sheriff replied the law enforcement community just needed a sign of encouragement from the administration.

Sen. Mike Lee of Utah released a statement on the policy changes Wednesday afternoon, saying "Instead of revising forfeiture practices in a manner to better protect Americans' due process rights, the DOJ seems determined to lose in court before it changes its policies for the better."

Lee noted that he encouraged the agency to review its policies on forfeiture in a letter sent to DOJ back in May along with Sens. Paul, Crapo Udall, Heinrich and King. The letter read, in part, that DOJ "need not wait for Supreme Court censure before reforming [civil asset forfeiture] practices" and encouraging DOJ "to revise its civil asset forfeiture practices to reflect our nation's commitment to the rule of law and due process."

The Justice Department sees the assets forfeiture program as a way to strip suspects of the proceeds of their activities, to deter crime and to compensate crime victims. An effort to expand it is in keeping with Sessions' tough-on-crime agenda, which he continued to espouse during Monday's speech.

He again implored prosecutors to pursue the toughest punishments against most crime suspects, echoing a directive he issued earlier this year to U.S. attorneys. He reiterated his top priorities: cracking down on illegal immigration and quashing violent crime. Sessions stressed the need to tackle gang activity, pointing to cities such as Minneapolis, where data show a recent uptick in violent crime. And he encouraged prosecutors to go after drug offenders, because "drug offenses are not nonviolent crimes, as most of you all know."