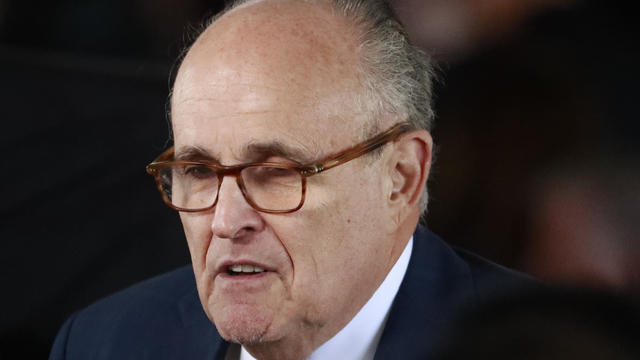 Rudy Giuliani says Donald Trump's attorney may have paid hush money to other women, too.

And Rudy Giuliani says Trump, the sitting President of the United States, might plead the 5th if subpoenaed by Special Counsel Robert Mueller and forced to testify.

How can it help President Trump move past the Stormy Daniels story to have a high-profile, media-friendly political celebrity like "America's Mayor" talking about it?  The conventional strategy would be to send Rudy out to talk about something else—the economy, crime, the Iran Deal (actually, he sort of did)—anything to change the subject.

Yes that would be the conventional strategy. So obviously that's not happening. Instead it's a week of Fox News hits and presidential tweets and an opening sketch on SNL….and rising poll numbers?

Yep. A new Reuters/Ipsos poll has President Trump's approval rating at 48 percent. The folks at Reuters were so surprised they posted a disclaimer on their own poll, calling it an outlier.  Is it?

Not as much as you'd think. Republican-leaning Rasmussen has it at 51 percent, but more significantly the overall RealClearPolitics average has the president's approval up to 44.4 percent. To put that in perspective, on December 15th Trump was at 37 percent approval/58 percent disapproval—a jaw-dropping 21 points underwater.

Since then, he numbers have steadily risen, and in the past two weeks or so they've surged.

And what else happened those past two weeks? Non-stop Stormy Daniels/RussiaGate/Mueller media coverage, capped by the return of Rudy Giuliani's high-profile pratfall onto the political stage.

Which is why I have another bit of advice for Mr. Giuliani: Ignore. Me.

Something is happening with American voters, and there are two working theories.  One is the "Return to Normalcy" theory: Unemployment just hit 3.9 percent, wages are rising, America looks like it's making progress on issues like North Korea and trade, the terrorists haven't had a good day in awhile—why shouldn't the president's numbers go up?  What's strange isn't that they're rising, it's that amid all the peace and prosperity, they're still relatively low. Trump's negative gravitational field is so strong it's keeping him in the low 40s at a time when a boring president would easily be enjoying a 50 percent approval rating. That's one theory.

Another theory is that Trump's showbiz style presidency, with its non-stop action, plot twists and punchlines has recalibrated America's scandal standards. Call it the "Shonda Rhimes" presidency.

Rhimes makes TV shows like Scandal (ironic, yes) and How To Get Away With Murder that are notorious for burning through plot. They have more surprise turns and main character deaths in a single episode than dramas in the 1980s had in an entire season. As a result, viewers' expectations for TV in general have changed, and other shows are struggling to keep up.

The Trump Show brought the pace of politics-as-showbiz to a breathless clip and viewers just can't keep up with all the plot points. As a result, every twist ("Trump knew about Stormy's money!") and turn ("And there may be more Stormy's, too!") has less power.  Now add a scrappy new co-star for Season Two—Rudy Giuliani as "Crazy Lawyer Guy!"—and the pace picks up even more.  More story, less time for outrage. Who can keep up?

What Americans can keep up with are events in their own lives. A son finally got a fulltime job with decent pay and moved out on his own. Home values are rising, putting equity back in people's pockets. They feel safer in their own communities.

There's one other possible engine of Trump's slow-but-steady rise, and to keep the TV show metaphor alive let's call it "the critics."

For nearly two years now, the Trump-unfriendly media and its Democratic allies have been promising the folks back home the big "Collusion Show!" soon followed by another 90's throwback (ala Roseanne): "Impeachment—This Time It's Personal."

Instead we've gotten the equivalent of "Al Capone's Vault." It may be the case that the Mueller investigation leads to a subpoena of the president, or even (very unlikely but possible) a criminal charge or even impeachment. But not for collusion. And voters who've seen thousands of hours of allegations and direct accusations from news desks across the cable channels are noticing that the oft-promised episode of "Vlad and Don's Excellent, Election-Stealing Adventure" has yet to hit their screens.

Taken altogether, it's easy for people who are feeling good about their personal circumstances and their nation's security to dismiss all the scandal as just more political white noise that's easy to tune out.

If that's the case, then Rudy Giuliani really might what he's doing.