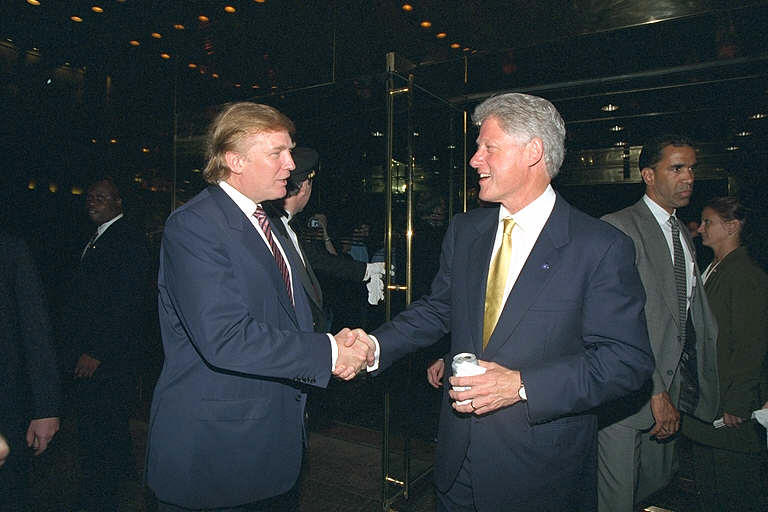 Imagine his top adviser saying of one of the women he allegedly groped, "Drag a hundred dollars through a trailer park and there's no telling what you'll find."

Imagine a journalist saying she'd allow Judge Moore to fondle her "just to thank him for being pro-life." And keeping her job. (Ironically, in the 1998 Mirabella magazine essay by the Time correspondent who fantasized about Bill Clinton, there was also this: "The richer and more famous they are, the less appealing. Donald Trump? Ugh.")

Imagine prominent feminists suggesting that the girls he allegedly groped were asking for it -- "it sounds to me like she put the moves on him," Susan Faludi conjectured. Betty Friedan declared, "Whether it's fantasy, a set-up or true, I simply don't care."

Well, for those of us old enough to remember the Clinton presidency, we don't have to imagine it.  We lived it.

In many ways, Bill Clinton was the Donald Trump of his era.  Trump is accused of coarsening our political discourse.  Bill Clinton was accused of the same. He pushed cultural boundaries by admitting he smoked pot (with the notoriously weaselly claim: "I didn't inhale") and answering the question "Boxers or briefs?"

The infamous DC Establishment Donald Trump is at war with didn't think highly of rustic Arkansas back-slapper Bill Clinton back in the day, either. The Washington Post ran a piece in 1998: "Establishment Disliked Clinton From The Start."

And long before the "Access Hollywood" tapes, Bill Clinton interjected uncomfortable topics about sex and fidelity into the national conversation.

In the year 1991 B.C. ("Before Clinton"), it was assumed that being widely known as a serial adulterer limited one's political horizons.  Yes, JFK was a cheater but compared to the men who followed, he seemed to be the exception that proved the rule. Plus Kennedy's infidelities weren't in the media, while Bill Clinton's relationship with lounge singer Gennifer Flowers was literally front-page news.

Twenty-four years after Clinton's first election, America elected another president who faced sex scandals many believed would doom his campaign: Multiple women accused Donald Trump of inappropriate contact, and the infamous tape of his locker-room talk with Billy Bush caught him talking about it.  And like Clinton before him, Mr. Trump dismissed, denied and obfuscated…and got away with it. How?

In part, that's because so many of his supporters still remember the pass Bill Clinton was given in the 1990s.  They remember how Hillary Clinton, who was part of the "bimbo eruption" war room, was declared a feminist hero at the same time she was disparaging powerless women who'd been victimized by her husband. She dismissed Monica Lewinsky as "a narcissistic loony tune."

They remember the press defending Clinton and ignoring his victims.  The Washington Post, for example, declared "By just about any standard but, apparently, his own, the President pretty plainly lied under oath in a court proceeding and repeatedly in public and private thereafter." But they also supported Clinton, despite the fact that his lying was part of an effort to deny a female victim of sexual harassment, Paula Jones, her day in court.

It's an argument that's apparently resonating on the Left.  Liberal media outlets like The Atlantic and the New York Times have recently published pieces arguing that Democrats need to re-evaluate their support for the former president.  New York Sen. Kirsten Gillibrand, who replaced Hillary Clinton in the Senate, said on Thursday in an interview with the New York Times that Bill Clinton should have resigned after his 18-month sexual relationship with a 22-year-old intern was revealed.

Gillibrand told the Times "things have changed today," but it's unclear what is different about a powerful man exploiting a young intern for sex in 1998—or in 2011, when Clinton appeared at a Gillibrand campaign rally.  His behavior was certainly no secret to the Democrats cheering him at that rally, or to the future senator standing by his side.

In fact, some Democrats still defend him. Thursday night Clinton aide Paul Begala was on CNN claiming Bill Clinton "didn't get away with anything."  Begala called Clinton—a man who lost his law license and paid $850,000 in a sexual harassment suit—"a good person." Albeit one "who did a very bad thing."

Members of the media often ask how President Trump was able to get past his issues regarding his treatment of women, how voters were able to get past truly disturbing actions and accusations and find a way to support him.

No need to wonder. Just go find Clinton supporters over the age of 40 and ask them.

Michael Graham is the author of the book, "Clinton & Me."