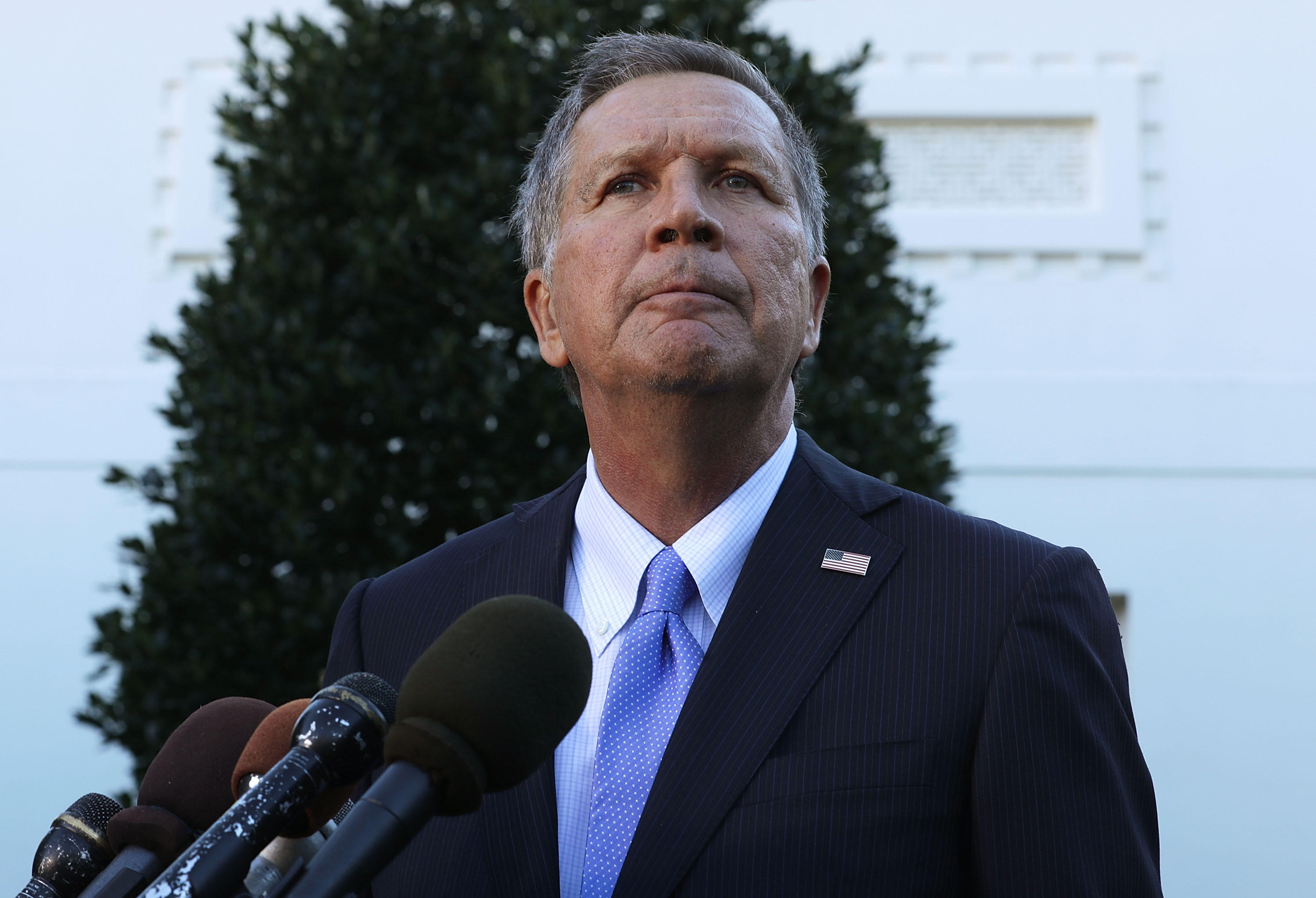 It is not immediately evident why anyone, or at least anyone outside Ohio, should care much about what John Kasich says or thinks.

The lame-duck governor has already run for president twice and lost. He's not a particularly charismatic or appealing figure. And to the extent most people in America know who he is, it's probably from his role as a marginal and somewhat irritating participant in the 2016 Republican primaries. To those in need of a refresher, he was the one who kept talking about how his dad was a mailman.

Still, the guy clearly thinks of himself as a national figure, and whatever else you can say about him, he has a knack for getting on television. Right now, he's in the process of reintroducing himself as that great rarity of politics, the Sensible Moderate Republican, a species long thought extinct outside of minor ecosystems like Vermont and Massachusetts.

But unlike your typical SMRs, Kasich will never be happy as a merely regional attraction. He wants to be president, and he's not really hiding it, what with his seemingly endless march through the greenrooms of Washington and New York. His top adviser, the liberal Republican strategist John Weaver, isn't playing coy either, and spends his days trashing Donald Trump on Twitter. In the wake of the Parkland shooting, Team Kasich was even caught updating his website to make it less stridently pro-gun. Needless to say, this is not the behavior of man who expects to retire from politics when his term ends next year.

The conventional wisdom, which in this case is probably correct, is that Kasich doesn't have a shot at the presidency. But that doesn't mean he doesn't matter. True story, however strange: A Kasich run in 2020 could be a big deal.

Let's game it out from Kasich's perspective. He can either enter the Republican GOP primary or declare an independent candidacy and run against Trump and the Democratic nominee in the general election. The chances of him getting to the White House through either route is, again, basically nonexistent. But that's not the point.

A primary challenge might go nowhere. For one thing, it's typically a foolhardy exercise to challenge an incumbent Republican from the left, which is what Kasich would do with Trump, because credible GOP primary bids come from the right, which is where the votes are. The same rule applies to Democrat incumbents, who can only be taken on from the left. Challengers only succeed when they run with the base of the party, not against it.

But let's say this time is different. The Republican Party under Trump, as we saw again in Pennsylvania the other night, is bleeding votes in their traditional suburban strongholds. And so far, the new voters Trump has brought into the party aren't making up the difference.

So let's say for a moment that Kasich can capitalize on Trump exhaustion among the GOP's traditional rank-and-file. Sure, this wouldn't be enough to steal the nomination. But it could go a long way to giving Trump a bloodier-than-expected primary, diverting his attention and underscoring lingering divides among the Republican electorate.

Primary battles have a way of leaving incumbent presidents snakebit in the general. Gene McCarthy and Robert Kennedy were enough to drive Lyndon Johnson out of the race in 1968. Ronald Reagan's 1976 primary challenge to Jerry Ford set the stage for Ford's loss to Jimmy Carter. And the ugly Democratic primary between Carter and Ted Kennedy in 1980 helped divide the left and deliver the presidency to Reagan.

Let's stay on 1980 for a second. That was the year little-known congressman John Anderson ran as an independent. Although not exactly a dynamo on the stump, his sincerity had a way of attracting an odd coalition of college kids and Washington media folk. And although he was a Republican in the House, he ran as a liberal and took votes mainly from Carter.

Anderson only won about seven percent of the popular vote, and Reagan probably would have won without him. But if Kasich, who despite his defects is a better and more polished politician than most, enters the general as an independent, he could conceivably win a similar number of votes, presumably in suburb-rich swing states.

In such a scenario, it's almost certainly Democrats who will suffer, because it will mean there's just one more anti-Trump option on the ballot. And given how close our national elections have become over the last 20 years, Kasich might not have to take all that much from the Democrats to ensure Trump's reelection.

The danger here for Democrats is particularly acute because they will probably not be running a moderate for president in 2020. Their base is increasingly radical on issues both cultural and economic, and any candidate who has a chance of winning their upcoming primaries will have to reflect that reality.

At the risk of indulging in some Sorkin-esque fantasy, there really might be a lane for a centrist independent in the next election, at least if the Democratic nominee is someone like Bernie Sanders. Given the choice between Trump and a true leftist, it's not at all inconceivable that some number of liberal-ish moderates will turn their lonely eyes to Kasich. And don't think a chunk of the commentariat won't take the bait, either, as the takes would basically write themselves: "How the Son of a Mailman Became America's Macron."

So the next time you see Kasich on television, which is sure to be rather soon, resist the sudden urge to change the channel. You may not be looking at our future president. But you might be looking at the guy who decides who that president is.