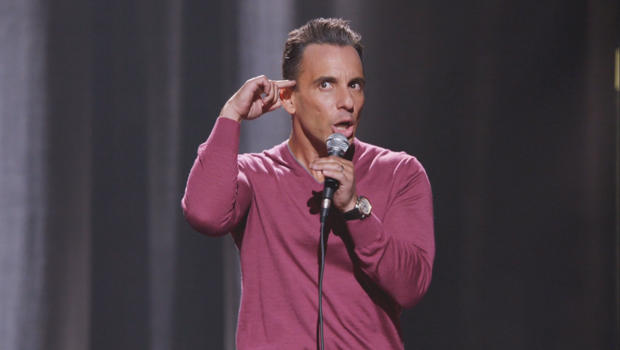 "Leave 'Em Laughing" is what stand-up comic Sebastian Maniscalco tries to do every time he takes the stage. This morning, he goes one-on-one with our Mark Strassmann:

Sebastian Maniscalco is exasperated, with everything.

"I was brought up with a certain set of rules on how to behave. And you look around today, everybody's got their own set of rules. Like, the basic courtesy in life I don't think is there anymore and I think I point those things out in my act."

That act is comic gold. His latest tour is selling out theaters across the country. In 2017 Forbes listed him as one of the top ten highest-paid comedians in the world.

At age 45, Maniscalco has turned his personal gripes with everyday life into a career as one of standup comedy's breakthrough performers.

"I went to my first Passover dinner. The food they start bringing out? Oh God terrible! Terrible food. Celery, crackers, jam. I'm like, what is it? We're losing people, people are leaving. We need food!"

His style is a unique blend of two of his early influences: the observational approach of Jerry Seinfeld, and the physicality of John Ritter.

Punchlines come alive in his pantomimes. And at the heart of his humor is family … in his case, a very colorful family. He grew up in Chicago, the son of Rose, a school secretary, and Salvo, a hairdresser born in Sicily.

"As a small kid, I loved giving book reports and just getting in front of the class, but was never the class clown," he said.

"And then going home and telling your family what happened at school today?" asked Strassmann.

"That sort of stage was the house. And whenever I get around my family, it just seems that the comedy tends to write itself."

Strassmann got a taste of that home-grown comedy at Maniscalco's house in Los Angeles last year. "These are a Sicilian cookie that my grandmother used to make called ... popocolovio? There's many words in the Italian language that my father is still trying to find the English equivalent to. Growing up we go, 'Dad, what does that mean in English?' 'He goes, 'Ahhhh ... it's tough.'"

Joining them in the kitchen: Sebastian's wife, artist Lana Gomez; his sister, Jessica; and, of course, his parents.

Jessica admitted taking part in a lot of "dad bashing," and it still goes on.

"Man cave? You're bragging about a man cave? My father had a man cave. It was THE HOUSE!"

Salvo Maniscalco, Sebastian's father, is a seemingly inexhaustible font of material. As Sebastian said, "Some of the material is so, like, verbatim out of his mouth. I don't even have to write it! I just tell the story."

"Yeah, just keep talking to me!"

Strassmann said, "You don't have to be Italian to appreciate the warmth of these stories."

"Soon as you start talking about family, there's an inherent relatability to what the people in the audience are watching. And they're like, Oh my God, my father! That's my dad! That's my wife! They start relating to your own lives."

Apparently, a lot of people are exasperated with their families. Maniscalco has had three specials on Showtime.  And his memoir, "Stay Hungry," tracks his life and career, which began when he moved to Los Angeles at age 24.

He waited tables at the Four Seasons in Beverly Hills. During breaks, he'd dash out to do a 15-minute set at the Comedy Club on Sunset Boulevard, and dash back to serve dessert. Fifteen minutes paid $15.

One day he waited on one of his comedic idols, Jerry Seinfeld. "I just kind of scrapped the whole formality of the Four Seasons: 'Good afternoon, how are you?' It was more like, 'Hey, what's going on? What do you guys want?'"

Fast-forward 15 years: Maniscalco was a guest in Seinfeld's series, "Comedians in Cars Getting Coffee."

"We're driving around Los Angeles in a 1969 Camaro and, you know, he validated me as a comedian in his eyes."

Strassmann asked, "Are you reminding people that it's okay to laugh at yourself?"

"Laugh at myself, laugh at others, and in a good-natured way," he replied. "It comes off as being friendly and loving, and I could not rip my father to shreds like I do onstage if I didn't love the man.

"So, what are we all getting all hopped up about? Just laugh!"