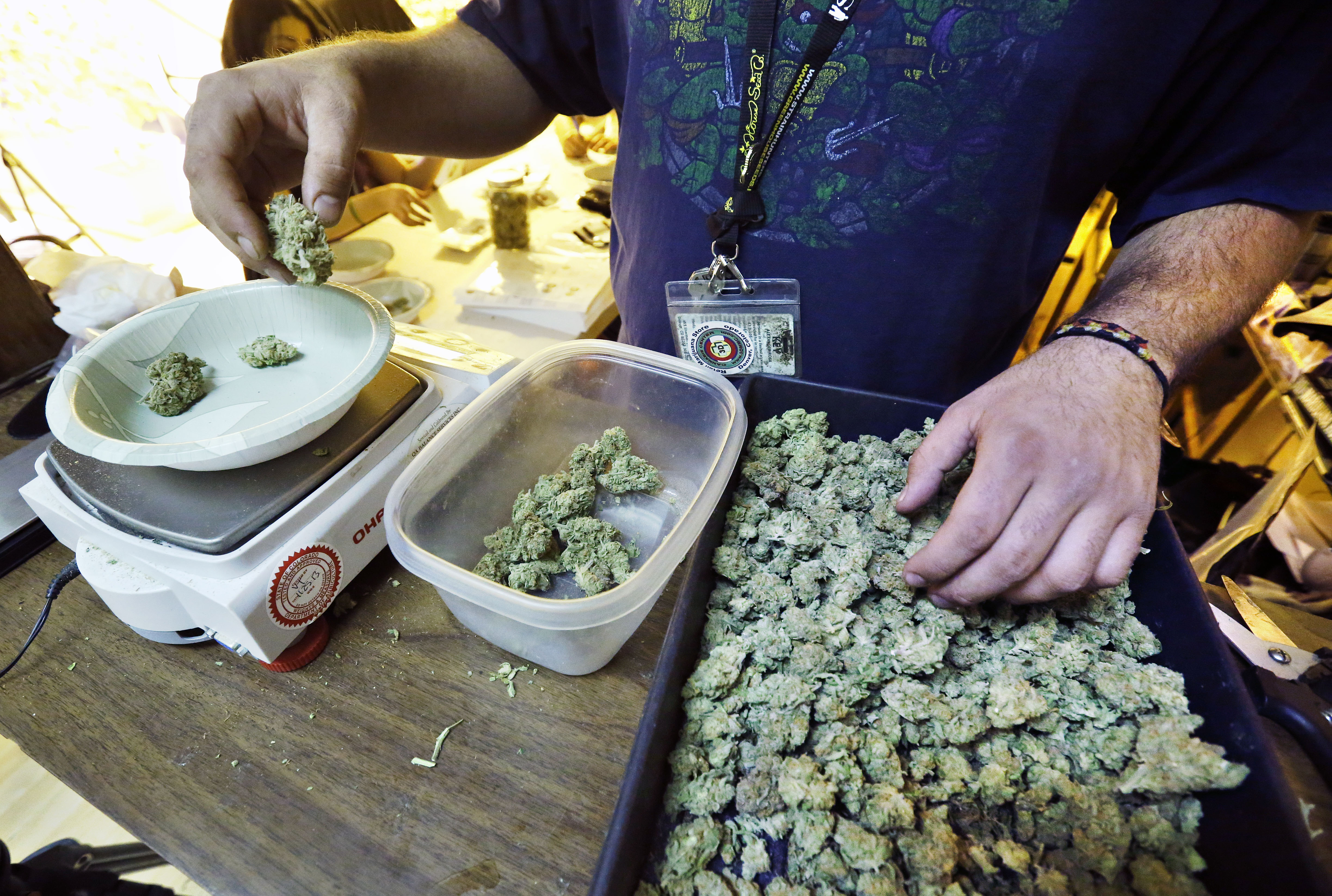 DENVER -- Firing up bongs and cheering in a cloud of marijuana smoke, pot users in Colorado hailed the arrival of the nation's first recreational pot industry Wednesday.

"Honestly, I thought I'd never see the day," said a giddy Errin Reaume of Denver, who shared hits of concentrated marijuana at a 1920s-themed "Prohibition Is Over" party in downtown Denver.

Across town, a dispensary was setting up a food truck and coffee service for campers awaiting the opening of sales on so-called Green Wednesday. Temperatures were in the upper 30s Fahrenheit -- balmy for a January night in Colorado -- and revelers ditched hemp jackets and sweaters as they alternated between horn blowers and joints and bongs.

Pot activists hope the marijuana experiment will prove that legalization is a better alternative than the costly U.S.-led drug war. Skeptics worry the industry will make the drug more widely available to teens, even though legal sales are limited to adults over 21.

Preparation for the retail market started more than a year ago, soon after Colorado voters in 2012 approved the legal pot industry. Washington state has its own version, which is scheduled to open in mid-2014.

Pot advocates, who had long pushed legalization as an alternative to the lengthy and costly global drug war, had argued it would generate revenue for state coffers and save money by not having to lock up so many drug offenders.

Still, setting up regulations, taxation and oversight for a drug that's never been regulated before took some time.

Colorado set up an elaborate plant-tracking system to try to keep the drug away from the black market, and regulators set up packaging, labeling and testing requirements, along with potency limits for edible pot.

The U.S. Justice Department outlined an eight-point slate of priorities for pot regulation, requiring states to keep the drug away from minors, criminal cartels, federal property and other states in order to avoid a federal crackdown. Pot is still illegal under federal law.

Police in the eight Colorado towns allowing recreational pot sales were stepping up patrols to dispensaries in case of unruly crowds. Denver International Airport placed signs on doors warning fliers they can't take the drug home in their suitcases.

With the additional police patrols, the airport warnings and various other measures, officials are hoping they have enough safeguards in place to avoid predictions of public health and safety harm from the opening of the pot shops.

But they confessed anxiety about the opening of retail sales.

"We understand that Colorado is under a microscope," Jack Finlaw, lawyer to Gov. John Hickenlooper and overseer of a major task force to chart new pot laws, recently told reporters.

There was no shortage of skeptics worried retail pot would endanger the public.

A group of addiction counselors and physicians said they're seeing more marijuana addiction problems, especially in youths, and that wider pot availability will exacerbate the problem.

"This is just throwing gas on the fire," said Ben Cort of the Colorado Center for Dependency, Addiction & Rehabilitation at the University of Colorado Hospital.

Marijuana activists were hoping Colorado's grand experiment wouldn't be that noticeable after an initial rush of shopping.

"Adults have been buying marijuana around this country for years," said Mason Tvert, spokesman for the Marijuana Policy Project. "The only difference is that in Colorado they will now buy it from legitimate businesses instead of the underground market."