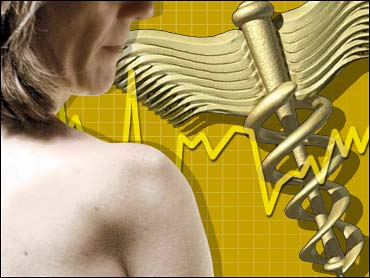 A widely used screening tool for colon cancer, sigmoidoscopy, misses precancerous growths in almost two-thirds of women — a disturbing failure rate twice as high as the one seen in men, a government-backed study found.

"All our data until now has been based on men. What this data shows is it's a lot worse in women," said Dr. Philip Schoenfeld of the University of Michigan and U.S. Department of Veterans Affairs.

The researchers said colonoscopy — a more reliable but more expensive test than sigmoidoscopy — should now be considered the preferred method for most women.

Even before the study, patients were increasingly choosing colonoscopies, in part because of serious questions about the reliability of sigmoidoscopies. The latest research is likely to accelerate the trend.

Both colonoscopy and sigmoidoscopy involve the use of a long, flexible tube to inspect the twisting colon for precancerous growths, or polyps. But a colonoscope is longer and is used to examine the entire 6-foot length of the colon, while a sigmoidoscope inspects only the lower 2 feet or so.

The new study, led by Schoenfeld, involved 1,463 women, ages 50 to 79, at four military hospitals. It was published Thursday in The New England Journal of Medicine and funded by the National Cancer Institute.

The researchers first used colonoscopes to find all polyps. They then calculated how many worrisome ones would have been missed by sigmoidoscopy alone.

Sigmoidoscopies are still performed for several reasons. A sigmoidoscopy is quicker, it is more convenient because it does not require the use of a sedative, and it costs far less than of a colonoscopy — perhaps $150 instead of $400 or more.

Also, many doctors had believed that the failure rate for sigmoidoscopies would be similar for both sexes.

A recent study by the Veterans Affairs Department found that demand for colonoscopies already outstrips availability. The researchers estimated that more than 30,000 additional doctors would be needed to screen people once every 10 years.

About 56,000 Americans are expected to die of colorectal cancer this year.