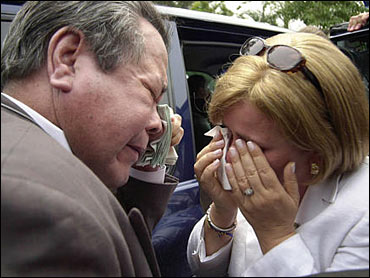 Colombian rebels began shooting hostages as soon as they heard military helicopters flying overhead, one of the captives said, describing a botched rescue attempt in which a state governor, former defense minister and eight other captive soldiers were killed.

Colombian President Alvaro Uribe took responsibility for the failed jungle raid in an emotional television address late Monday in which he asked for the nation's support in Colombia's fight on terrorism.

But despite a growing public clamor to exchange jailed guerrillas for dozens of remaining hostages — including a presidential candidate and three Americans — Colombia's military commander vowed Tuesday to push ahead with more rescue operations.

One of the survivors, army Cpl. Antinor Hernandez, said he escaped by pretending to be dead.

"When three shots rang out, I threw myself to the ground and Gilberto (Echeverri) fell injured on top of me, and they shot him again and shot me in the leg," Hernandez told reporters late Monday. "But since I didn't move, they thought I was dead."

He said the rebels fled after killing the hostages, and the army arrived within 20 minutes.

Before seeing the pile of bodies, Hernandez said the Colombian troops began telling the rebels through megaphones they wouldn't be killed if they surrendered and that "there is no need for even one shot to be fired."

Gaviria's wife tearfully blamed Uribe's government for the deaths. "The government provoked this situation," said Yolanda Pinto as she waited Tuesday in Medellin's airport for her husband's body to be flown from the remote jungles of northern Colombia.

In an emotional televised address Monday night, Uribe took responsibility for the raid — but vowed to continue his hard-line stance against the rebels, who have waged war in this South American country for 38 years.

"In this moment of pain, Colombia cannot surrender," he said. "We must now fortify our decision to defeat terrorism."

The FARC is also holding three Americans captured when their plane went down in rebel territory in February. The U.S. Embassy in Bogota declined to comment on rescue operation.

Washington is providing the Colombian military with intelligence assistance as well as helicopters and other military hardware, and U.S. Special Forces are in Colombia training troops in counterinsurgency tactics.

The rebels want to exchange the hostages for guerrillas in government jails. The rebels are also holding hundreds of ordinary Colombians for ransom, but they are not part of the rebels' proposed swap.

Uribe said he would only consider an exchange if it was brokered by the United Nations, included freedom for all hostages, and involved a third country — possibly France — taking in the rebels and guaranteeing they would not take up arms again.

Pinto said the government didn't consult with her family before launching the operation to rescue her husband, who was governor of Antioquia state, and the other hostages.

"We had asked that the president communicate any decision to us, and he promised to do that. He didn't," Pinto said, adding that she and other family members had feared the rebels would kill the prisoners if a rescue was attempted.

However, the daughter of the former defense minister said she supported Uribe.

"We are not going to question the president," Lina Echeverri told reporters. "We support him and the military forces."

"We will continue doing them because it is our constitutional responsibility to bring home, all the Colombians that these bandits have kidnapped," Mora said.

Opinion polls show most Colombians oppose freeing imprisoned rebels for the hostages, fearing the freed rebels would continue waging their terrorist war against the state.

But many relatives of hostages fear their loved ones will be killed if the government presses forward with rescue attempts.

"Looking at these tragic results, we are going to insist that the government abstain from doing any military operations to rescue Ingrid," said Juan Carlos Lecompte, the husband of the former presidential candidate, who was kidnapped at a rebel roadblock 15 months ago.

Gaviria and Echeverri were kidnapped on April 21, 2002, as they led hundreds of peace marchers from Medellin to the village of Caicedo to meet with FARC commanders.

LaFayette remembered Gaviria as "a nonviolent leader," in a telephone interview Tuesday from Providence, R.I. "He himself put his life on the line."

About 3,500 people, most of them civilians, die every year in the fighting with the rebels. The rebels also kidnap about 3,000 people every year, mostly for ransom.