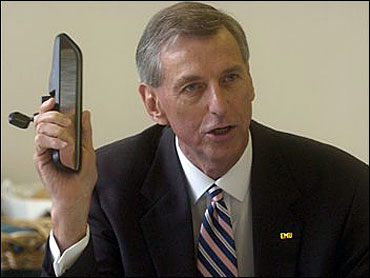 Three Eastern Michigan University administrators, including the president, have been forced out, months after top school officials were accused of covering up the rape and slaying of a student by publicly ruling out foul play.

President John Fallon was fired, and Vice President of Student Affairs Jim Vick and Public Safety Director Cindy Hall lost their jobs at the 23,500-student university, the chairman of the school's governing board said Monday.

Board of Regents Chairman Thomas Sidlik also said the board would put a letter of discipline in the file of university attorney Kenneth McKanders.

The body of the slain student, Laura Dickinson, 22, was discovered Dec. 15 in her dorm room. At the time, university officials told her parents and the media that she died of asphyxiation but that there was no sign of foul play, despite evidence to the contrary.

It was not until another Eastern student, Orange Taylor III, was arrested in late February and charged with murder that her family and students learned she had been raped and killed. Taylor has pleaded not guilty to murder and criminal sexual conduct charges in Dickinson's death, and is scheduled for trial Oct. 15.

An independent law firm investigation and U.S. Department of Education report both found that the 23,500-student public university violated the federal Clery Act, which requires colleges and universities to disclose campus security information.

Many in the university's administration were accused of covering up the truth and endangering students to protect the school's image, which has been marred in recent years by tensions with faculty, students and the community.

Fallon's secretary did not know how Fallon could be reached for further comment. Fallon told the Ann Arbor News that a termination letter indicated his office had been secured and arrangements would be made for him to retrieve his personal items. He told the newspaper he was upset with how the board handled his firing.

"As a citizen, I am disappointed in this hastily called meeting, without any opportunity to be present or to respond," Fallon told the paper. "I have a story to tell and intend to tell it."

Messages left by the AP at a telephone listing for the official president's residence at Eastern Michigan and by e-mail were not immediately returned. Board members said Fallon has 60 days to leave the property.

Fallon, 60, told the Ann Arbor News Sunday that he would comment at length in the days ahead on his termination and his tenure at EMU.

The board appointed Provost Donald Loppnow as executive vice president. In that dual role, Loppnow will serve as the school's chief executive until an interim president is selected.