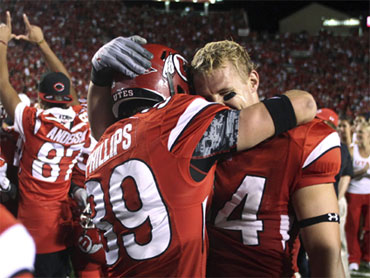 (CBS/AP) Utah freshman Brian Blechen intercepted a pass on the first play of overtime, setting up Joe Phillips for a 21-yard field goal that gave the Utes a 27-24 .

Pittsburgh had rallied with 14 points in the fourth quarter, forcing overtime on Dan Hutchins' 30-yard field goal on the final play of regulation.

But after Utah won the toss and elected to play defense, Blechen quickly doused any hopes the Panthers had of completing the comeback when he bolted in front of Pitt receiver Mike Shanahan and grabbed Tino Sunseri's pass at the sideline.

Jordan Wynn passed for 283 yards with three touchdowns for Utah, including two to Jereme Brooks.

COLUMBUS, Ohio - Terrelle Pryor tossed three touchdown passes, Brandon Saine rushed for 103 yards and two scores and No. 2 Ohio State rolled over error-prone Marshall 42-7 on Thursday night in a tuneup for a big date with Miami.

It was a bleak debut for new Marshall coach Doc Holliday. The Thundering Herd fumbled the opening kickoff and were down 14-0 before running their first play in Ohio State territory.

MIAMI - Jacory Harris threw for 210 yards and three touchdowns before sitting out the second half, Leonard Hankerson caught six passes for 115 yards and two scores, and the Hurricanes rolled.

Damien Berry had a 32-yard touchdown reception for the Hurricanes (1-0), who were up 35-0 after the game's first 25 minutes and visit No. 2 Ohio State next Saturday. Lamar Miller and Mike James had touchdown runs for Miami, and Ray-Ray Armstrong returned an interception 22 yards for another score.

Philip Sylvester rushed for a team-best 45 yards for the Rattlers (0-1).

HONOLULU - Matt Barkley and Ronald Johnson connected on three touchdowns to make Lane Kiffin a winner in his first game for the Trojans to start the post-Pete Carroll era.

Barkley passed for 257 yards and tied a school record with five TD passes while Johnson matched a USC mark with his three TD catches. Johnson also returned a punt 89 yards for another score in USC's first game after being hit with sanctions by the NCAA that include a postseason ban this season.

Johnson's two scores in the third quarter, a 3-yard catch and the punt return, helped break the game open for the Trojans (1-0), who took a 42-23 lead into the fourth.