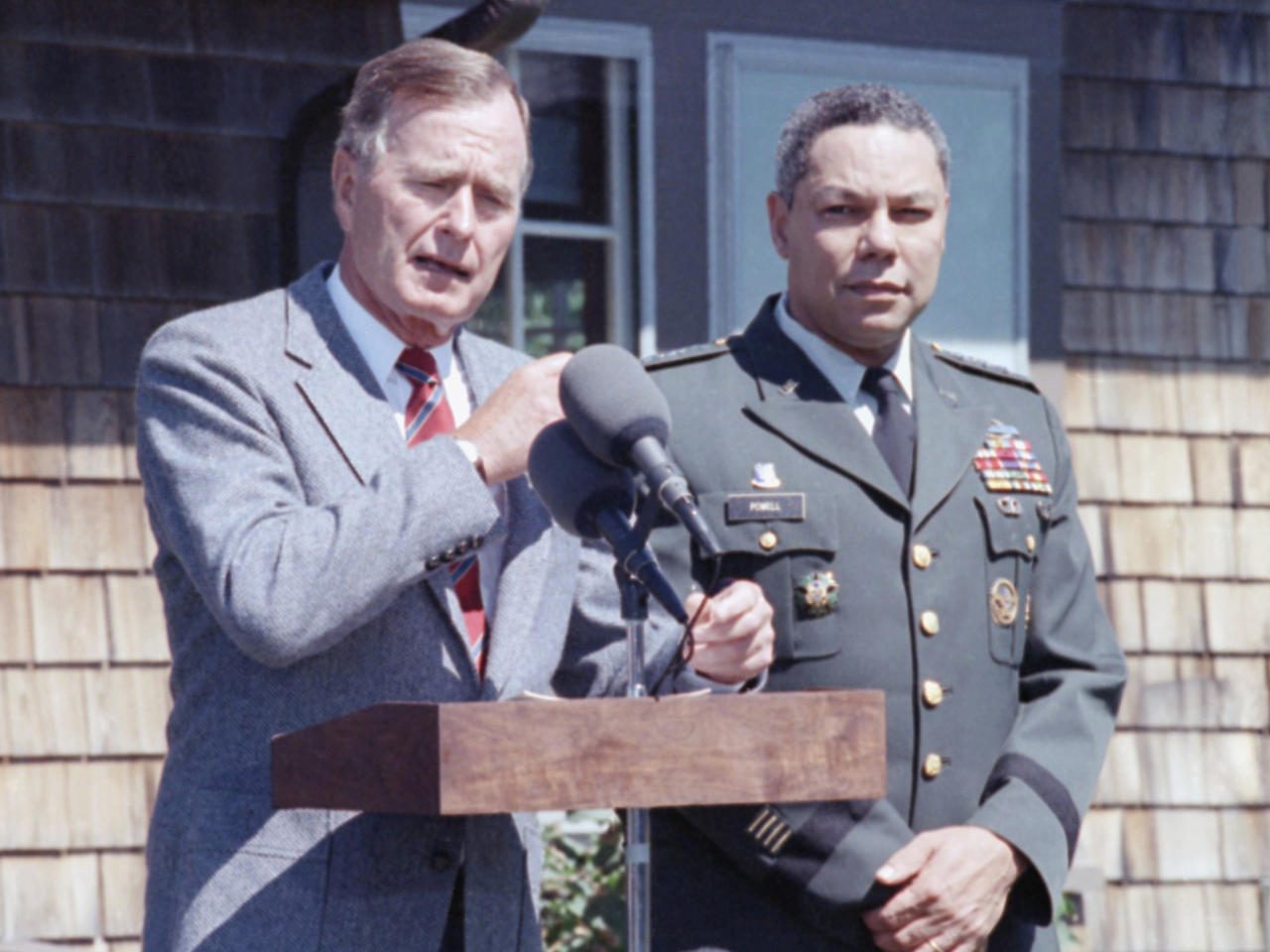 President George H.W. Bush was praised as a man of vision by retired General Colin Powell, who served as Mr. Bush's Chairman of the Joint Chiefs of Staff during the first Gulf War.

As president, Mr. Bush was cautious but not timid. And despite his oft-quoted remark dismissing "the vision thing," he did have a vision regarding foreign policy, Gen. Powell said.

"This was a man with vision; he just didn't broadcast it. But he knew what he was doing. He was with Reagan for those years when the Soviet Union was started to come apart and Gorbachev came on the scene. And so he was ready to take over from Reagan and he knew what he was dealing with in Gorbachev.

"But he was cautious. And in the first few months of his administration, he was a little reluctant to move out too quickly to work with the Russians. But then when he realized what they had and what they were needing, he jumped right in and he immediately went [to the Malta Summit]. You may recall the summit meeting he had on that ship in the storm – Bush loves that!"

"But that's the way he was. He was cautious. And whenever we had to meet on something, whether it was Panama or Desert Storm or Desert Shield, you would sit with him in the Oval Office, the 'Gang of Eight' we called ourselves, and we all knew each other from other positions. So we were buddies but we knew how to fight and argue with each other, and we would do that in front of the president. And he would listen and start chewing his lip and asking a few questions. But he was very, very cautious and he would take it all in, and he would not make some jump decision out of nowhere. He would think it through and then decide what was best for the country.

Having served in war himself (Mr. Bush was the last U.S. president to have served in combat) also influenced his views.

"He knows loss," said Powell. "And when we ended the Gulf War, rather surprisingly to the public, he did that because he said, 'Is there any reason to kill more Americans, or to kill more Iraqis?' And he wanted to bring the war to an end. The war was defined in time and space – we were going to kick the Iraqis out of Kuwait, we are going to restore the government of Kuwait, and make sure that Iraq doesn't have capability to do that again. All that was accomplished. And this nonsensical comment about, 'Well, why didn't he go to Baghdad?' It's nice to say that now. But he and the United States and the world had a mission, and that was to deal with the Iraqis in Kuwait and not to go take over the country of Iraq. He'd hoped Saddam Hussein would fall; didn't happen."

He would not, for example, take a "victory lap" following the end of the Persian Gulf War, after a U.S.-led coalition of troops drove Saddam Hussein's invading forces out of Kuwait.

"No, he wouldn't do it. He would never do any such thing, because his mother [who taught her son to be humble] would come down on him," Powell said. "But that was the way he was after almost everything. After the Gulf War, people were absolutely overjoyed with what they saw their soldiers, sailors, Marines doing. And New York wanted to have this massive ticker tape parade which they put together going down Broadway, just like the old days. And Bush said, 'I'm not going to go.' 'Mr. President, why not?' 'This belongs to the troops, not to me.'"

Humility would come to define his presidency by being a part of his policy. "It was always there," Powell said. "He was tough, let no one think that he was soft. But he always cared for the other person. He always tried to look out for the needs and wants of the other person.

"And so when the Cold War ended and the Soviet Union was falling apart, he was more interested in what they needed to become a functioning society and a democratic system than anything else."

Another example was Mr. Bush's request that veterans of the invasion of Panama and Desert Storm attend his funeral. Powell said, "He specifically asked that we assemble this group of troops so that they could pay tribute to him, but that isn't what he really wanted; he wanted to pay tribute to them."

"Emotional terrorists": The financial and psychological toll of catfishing scams

Newly-released video shows how a man survived nearly 100 feet under the surface, in an underwater wreckage, thanks to an air pocket