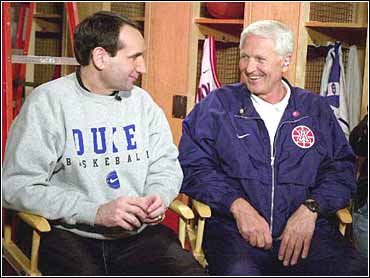 They are two of a kind, a pair of coaches admired for the way they go about the tricky business of winning year-in and year-out, celebrated for their dedication to players and teams.

Duke's Mike Krzyzewski and Arizona's Lute Olson have intriguing similarities. Both almost always graduate their players, only occasionally losing them early to the pros. Both have won more than 600 games, Olson passing the plateau last year, Krzyzewski achieving it this season. And both survived personal and career crises.

They had one other thing in common as they reached for the NCAA championship Monday night. They are both finalists for the basketball Hall of Fame, acknowledgment of a lifetime of accomplishment in the game. It was the first time Hall of Fame finalists have faced off in the national title game.

And they bring impressive credentials to their candidacies.

Krzyzewski's .797 winning percentage going into the championship game was the highest for all active coaches with a minimum of 20 NCAA tournament games. His 55 tournament victories were second all-time, trailing only Dean Smith's 65. Duke's semifinal victory over Maryland was the ninth Final Four win for Coach K, tied with Adolph Rupp, trailing only John Wooden's 21.

Olson is one of just 11 coaches to take two different teams to the Final Four. This was his 17th consecutive trip to the NCAA tournament with Arizona, the longest current streak for a coach at one school and second longest in history behind Smith's 23 straight at North Carolina from 1975-1997. Olson's 37 tournament wins were third most for active coaches behind Krzyzewski's 55 and Bob Knight's 42.

Both men had low-profile college coaching starts. Krzyzewski spent five years at Army, where he was 73-59. Olson had three years of junior college before moving on to Iowa for nine seasons, where he was 168-90.

"Nine years in the Big Ten, fighting icy roads," he said. "It was always cold airplanes, cold cars. Enough was enough for me."

So he left a lifetime contract and a winning situation at Iowa for an Arizona team that was 4-24 the year before he arrived. "And a couple of those wins were against Division IIs." he said. "My assistants thought I was crazy."

He brought success with him, though, and soon the team was winning and a constant in the NCAA tournament, winning the championship in 1997.

"When you look at the program, the key is getting great kids," he said. "I've been blessed with a lot of great young people. Good kids want to be with good kids. We've been fortunate."

The same thing happened at Duke. After three seasons of adjustment, Krzyzewski had the Blue Devils on track.

"I wasn't hired to win a national championship," he said. "I was hired to coach a really good basketball team, bring in good kids and do things according to the rules."

Duke also happened to win the 1991 and 1992 tournaments, the last repeat champions. Coach K tries to keep the success in perspective, frequently referring to his humble background. When he was asked about Duke's winning karma, he joked about it.

Then he shot a one-liner.

"I do know Karma," he said. "He played second base on my baseball team in Chicago."

When he was interrupted by a reporter's cell phone during a news conference earlier in the tournament, Krzyzewski kidded the writer. "You know the NCAA has rules," he said. "That happens again, you go for a drug test."

Olson has been less flip, probably because of the sorrow he still carries over the death Jan. 1 of his wife, Bobbi. The support of his family, friends and the team helped him through.

The games have kept his mind off the loss. The tough part has been after games, when Bobbi often met him with a hug and kiss. "We were married for 47 years and dated for two," he said. "It's difficult for me. It's a difficult thing to deal with when you're togethe that long."

Krzyzewski experienced his own crisis in 1995 when back pain forced him to leave the team at midseason. It was a defining time in his career.

"One, it made me understand how much I love coaching because it was taken away from me," he said. "The second thing is that I was going to enjoy every year as a single entity and not allow other people to define the year for me."

So returning to the Final Four for the ninth time was a fresh experience for him.

"It's a different team each time, different kids," he said. "You kind of live the season through the kids on your team and that's what makes it exciting."