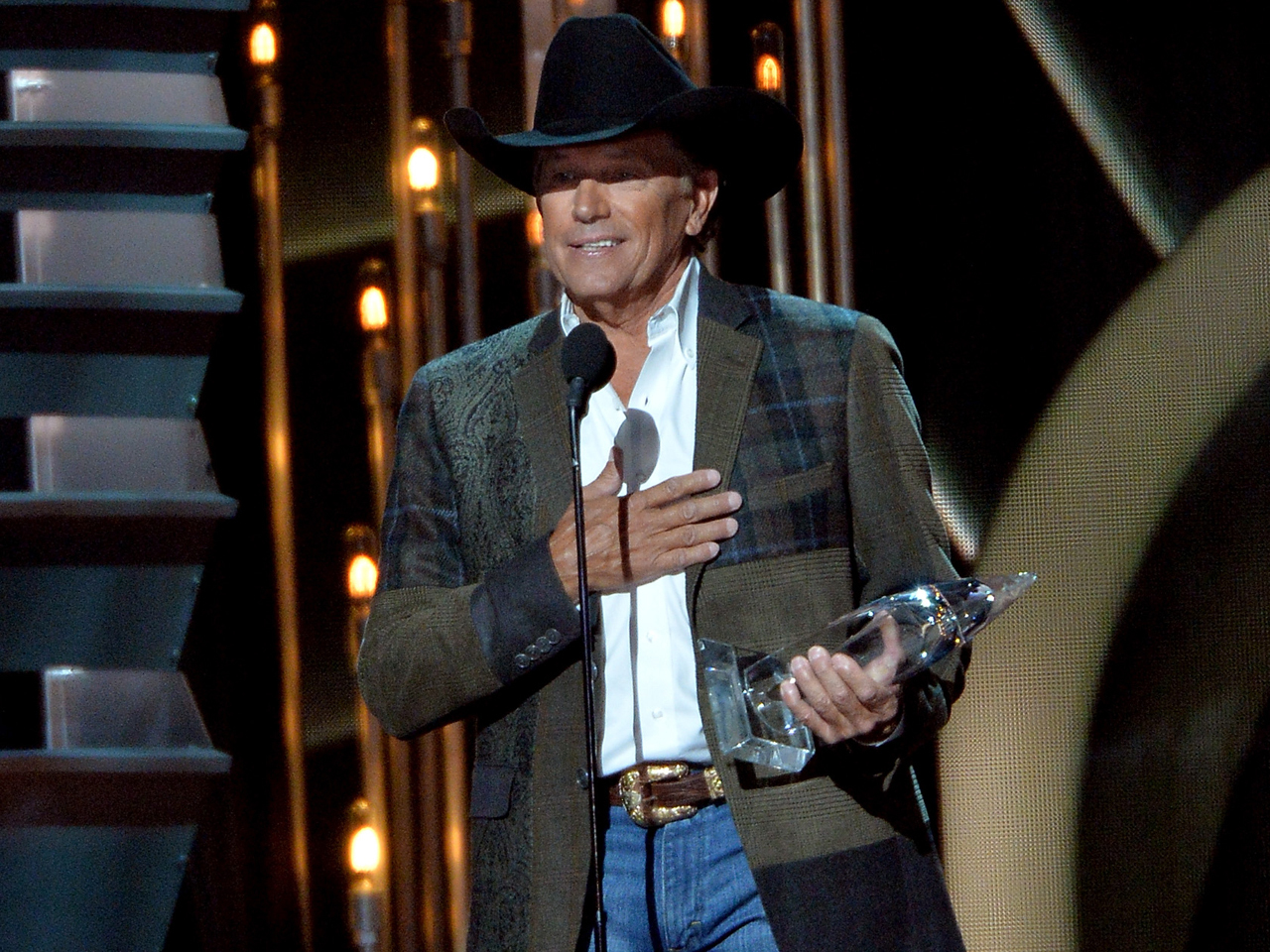 George Strait has captured the top honor at the Country Music Association Awards, winning entertainer of the year.

The win Wednesday night was Strait's third in the category -- but his first since 1990. The 61-year-old Texan is retiring from the road and has been celebrated by his peers as he completes his The Cowboy Rides Away tour.

"This blows me away," he said. "This means the world to me, I appreciate it. Thank you."

He capped a night where there was no clear favorite -- Blake Shelton, Taylor Swift, Keith Urban, Tim McGraw and Florida Georgia Line won two awards each.

Lambert won her fourth straight female vocalist of the year award while her husband, Shelton, won album of the year and male vocalist -- a category he also won for the fourth year in a row. Florida Georgia Line took too early awards to join Swift, Keith Urban and Tim McGraw atop the early winners list.

"I really didn't think this was going to happen this year," Lambert said before thanking each of the other nominees.

The husband and wife have been favorites of the CMA's 6,000 voters for the last three years and Wednesday as no different. Shelton's album of the year win for "Based on a True Story ..." was a bit of a surprise, a year after taking entertainer of the year.

"I had mentioned earlier today that if there was award that would mean the most to me tonight, it would be album of the year," said Shelton, getting serious after jokingly snatching his trophy from presenter Sheryl Crow.

Florida Georgia Line's Tyler Hubbard and Brian Kelley scored single and vocal duo of the year. Their quick tally was more proof the so-called bro country movement is the sound of the moment in mainstream country. FGL kicked off the show performing a fist-pumping medley with Luke Bryan, and very quickly returned to the stage to take the trophy for single of the year for their "Cruise" remix featuring Nelly. They also played the new song "Round Here."

Meanwhile, Kacey Musgraves -- who, along with Taylor Swift, led all nominees with six -- won the new artist trophy, besting a field including Florida Georgia Line. With smart songwriting, a progressive bent and a strong sense of self like country's other top women, Musgraves made an auspicious mainstream country debut this year with her album "Same Trailer Different Park."

"This first year for me has just been undescribable," said Musgraves, who set a record for nominations for a woman in her first year on the show.

Hosts Carrie Underwood and Brad Paisley got the show going on a jovial note as they took the stage with their opening skit, first joking about feuds in music. They got Bryan and Zac Brown to hug it out after their mild feud over song trends in Nashville. They skewered Obamacare, poked fun at Julianne Hough's misguided blackface Halloween costume and parodied "Blurred Lines" with the guys from Duck Dynasty.

And, of course, they took a moment to poke fun at Miley Cyrus. Paisley thanked Swift "for never once humping a teddy bear or gyrating with Beetlejuice." Swift responded with an imaginary tip of the cap.

Underwood added, "If someone in music was gonna be caught naked licking a hammer, I think we know we all thought it'd be Blake Shelton."

Swift tied Florida Georgia Line with two trophies after her "Highway Don't Care" collaboration with Tim McGraw and Keith Urban won musical event and music video of the year before the show began. Lee Brice's "I'd Drive Your Truck," about a fallen soldier whose father still drives his truck, won song of the year.

Swift later performed a somber, acoustic version of her hit "Red" with Vince Gill, Alison Krauss and Sam Bush and was given the CMA's Pinnacle Award. The award goes to artists who take country music to a worldwide audience. Garth Brooks is the only previous winner. He won in 2005.

The CMA brought a star-studded welcoming group out of stage for Swift that included George Strait, Rascal Flatts, Tim McGraw and Faith Hill, Keith Urban and Brad Paisley - all of whom gave Swift a chance to open for them on the road a teenager. A video salute followed with appearances by Justin Timberlake, Julia Roberts, Reese Witherspoon, Ellen DeGeneres, Carly Simon, Ethel Kennedy and Mick Jagger -- whose appearance made Swift shout.

Accepting the award, the 23-year-old Swift said: "You've made me fell so special right now, thank you."

Bryan and FGL weren't the only acts teaming up. Collaboration was the theme of the night as Strait and Alan Jackson joined together to salute the late George Jones with a rendition of "She Stopped Loving Him Today." Hunter Hayes and Jason Mraz took a tour of the Bridgestone Arena while performing "Everybody's Got Somebody But Me." And Brown and his band joined in on a growing hard-rock trend in country as Foo Fighter Dave Grohl joined the band on drums for "Day for the Dead." Church earlier turned things up to 11 with his new song "The Outsiders."

And in one of the night's most anticipated moments, Kenny Rogers received the CMA's Willie Nelson lifetime achievement award and was saluted by Jennifer Nettles, Rucker and Rascal Flatts. Rogers sat on stage and mouthed along as Rascal Flatts sang "Just Dropped In (to See What Condition My Condition Is In)," the crowd helped Rucker sing "The Gambler" and Nettles and Rogers finished the tribute by singing "Islands in the Stream."

"It's been a hell of a month," Rogers said. "The (Country Music) Hall of Fame last week, this this week. I can't wait to see what's coming next week."