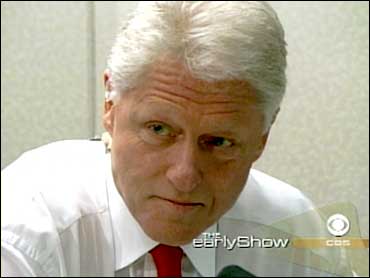 With his new memoir, "My Life," showing sales of more than 600,000 copies, former President Bill Clnton sat down Thursday night with The Early Show co-anchor Harry Smith for a hour-long simulcast on Infiniti radio and AOL on the Internet.

Mr. Clinton took listeners' calls and answered Smith's questions. The following are some of the highlights of the hour:

Smith: A lot of people have said, you know what? Clinton didn't do enough in terms of fighting terrorism, because he was preoccupied with the scandal in the White House.

President Clinton: Well, I think the only people who have said that are people who don't know what they're talking about. I don't believe any informed person has said that. If you read Richard Clarke's book, he certainly doesn't say that.

Smith: You talk in the book about before your attacks and being concerned it would be like a "Wag the Dog" situation.

President Clinton: I wasn't concerned. Some of my staff was. We knew the terror issue was a big problem. We knew Osama bin Laden, al Qaeda, were a big problem. There have been many more weapons at the hands of the United States since 9/11. They still don't have him. I wish we'd gotten him. I can honestly say we were focused on it. We wished we could.

Smith: We didn't start with this, but you knew we were going to get to this part of the conversation. The piece of tape that ran sort of ad nauseam through the second half of your administration was, "I did not have sexual relations with that woman." I think the question a lot of people never really maybe come to grips with or understood, from your perspective, is why did you lie?

President Clinton: Well, first of all, it was dishonest, because it was a completely misleading statement, although in the context of that stupid deposition I did, it was technically accurate, as I explained. I regret it. I did it because I was being urged to go out and issue a stronger denial than I had previously done. I was under a lot of stress and my judgment was poor and I failed the American people. What I should have said is I want you to know that I did not break the law nor did I ask anyone else to break the law. That's what I should have said. And I should have said no more. I think most people, if they'll read the book, will get it. They'll get me and they'll get how this happened and why it happened.

Smith: You talk so much about faith in this book. If you want to quote Scripture, I don't know if there are many presidents who could go toe to toe with you. Talk about how your faith has sustained you through, arguably, very difficult times.

President Clinton: First of all, I'm a Christian, so I believe all have sinned and fallen short of the glory of God. And it was painful to me to be attacked so much when I was president by the so-called religious right and to be told that, basically, God had a political platform and it was platform of the Republican Party. That was really painful for me, because I'd always been a person of faith. And I'd always believed that St. Paul was right, that when he said, in Corinthians: "For now we see through a glass darkly, but then face to face. Now we know in part, but then we will know even as we are known. And now by faith, hope, and love, these three, but the greatest of these is love."

Why do I have to be charitable, if I'm a good Christian, toward Kenneth Starr? Because I only see you through a glass darkly. I only know in part. And I think the kind of absolutist rhetoric and judgmentalism, which has such a wide berth in American politics and often works in elections is a terrible mistake. It's going to get us in trouble. Anytime you govern by ideology or theology, you're going to get in trouble. We see it over and over again.