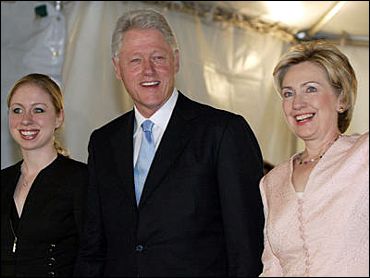 This figure surpasses wife Sen. Hillary Rodham Clinton's print run for "Living History" that until now, is believed to have held the record for the biggest debut for a nonfiction book.

"Bookstores are demanding books and our aim is to meet that continuing demand," Paul Bogaards, executive director of publicity at publisher Alfred A. Knopf, said Thursday.

Knopf paid the former president a reported $10 million for "My Life," his 957-page memoir. The book already is in its third printing.

Published on Tuesday with a first printing of 1.5 million, "My Life" sold more than 400,000 copies in the United States on in its first day, the biggest debut ever for a nonfiction book and double that of "Living History."

The former first lady's book came out last year and has 2.3 million copies in print, according to her publisher, Simon & Schuster.

Reviewers have been unimpressed, but the former president almost certainly will earn back his advance.

Mr. Clinton is certainly doing all he can to push for bookseller history, giving and going on to hit the talk show and magazine interview circuit in a big way.

"That was just a simple day when I had to acknowledge to the people I loved most in the world that I had failed," he told Rather about his affair with Lewinsky. "I had done something bad, and I hadn't felt I could tell them about it before."

He expressed concern for Lewinsky in an interview with NBC's "Today."

"She's an intelligent person, a fundamentally good person. What I hope is that she will not be sort of trapped in what Andy Warhol referred to as 'everyone's 15 minutes of fame,"' Clinton said.

But sales for "My Life" will almost certainly not approach the debut of "Harry Potter and the Order of the Phoenix," which sold an estimated 5 million copies on its first day.

Clinton was greeted by adoring crowds as he launched the tour for his autobiography on Tuesday in New York, with many readers getting up early or using their lunch breaks to buy it. Fans slipped him notes, pictures and leaned across the desk to say they loved him. One young woman was in tears, speechless, after her book was signed. Another was heard telling her friend, "That was intense! Oh, my God!"

Clinton later signed books at Hue-Man Bookstore near his office in Harlem, saying he was proud to once be described as "our first black president."

"I hope that this book will in some way be a gift to black America, that they'll understand that we can get together. We just have got to keep working at it," Clinton said.